Historic one-two result achieved by the Cycles Peugeot pro team, that taking the top two spots in the general classification of the French Cup for electrically assisted Enduro mountain bikes.

Yannick Pontal and Mathieu Ruffray, riders of the Peugeot eM01 FS e-bikes, secured this result by coming 2nd and 4th in the final round, Sunday 22nd August in Thollon les Mémises (Haute Savoie).

In parallel, the Peugeot rider Morgane Jonnier finished in the top 5 of the French Enduro Mountain Bike (non electric) Championship which also took place this weekend in Thollon. Cycles Peugeot, whose Team Pro is committed to Enduro races, is also a partner of the French Cup. Competing is part of the manufacturer’s electrification strategy and is a clear demonstration of the performance and reliability of its bikes. 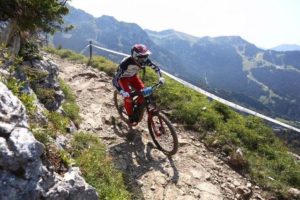 After their double win in the first round at the beginning of July in Risoul (Hautes Alpes), they finished 2nd and 4th in the second round in Thollon les Mémises (Haute Savoie). Around forty professionals (Elite riders) and amateurs competed. They tackled almost 2,900 metres of positive altitude difference on Saturday and 2,550 on Sunday during the 11 timed special stages and the liaison courses.

We had a great weekend on the French Cup with the whole team. I’m very happy with my race and how I felt because I was competing for first place until the end with the best in the world riders. This bodes well for the upcoming world cups… – said Yannick Pontal, Peugeot Elite Cycles rider.

With more than 50 minutes of time, physical and technical stages, I struggled to keep up with Yannick Pontal and Nicolas Vouilloz’s pace from the first time stages. Fortunately, the staff did a very good job, for the bike and for the rider (laughs). It’s a great double for the Peugeot eM01FS e-bikes! – said Matthieu Ruffray, Elite Cycles Peugeot rider.

It was a great week-end for Cycles Peugeot: I am proud of the drivers and the work of the team. We obtained very good results with a great atmosphere and the brand was well promoted… What to attack with impatience a dense month of September, eagerly the continuation – said Vincent Ancelin, Cycles Peugeot Team manager. 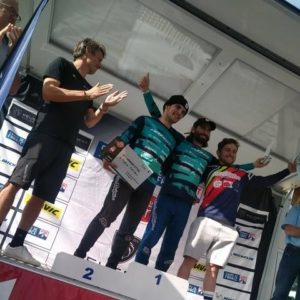 In 2021, the Team Pro Cycles Peugeot is running in the e-MTB and MTB Enduro competitions: Cup, French Championship and Enduro World Series (World Cup). Cycles Peugeot is a partner of the French Cup: the brand is visible on the podiums, on the trackside and on social media. The commitment to e-MTB competition highlights Peugeot’s electrification strategy for its 2 and 4-wheel vehicles.

The competition is a showcase for Peugeot MTBs. The riders developed and tested the winning bike, the Peugeot eM01 FS PowerTube (e = electric, M = Mountain, 01 = top of the range, FS = Full Suspension, PowerTube = Bosch battery integrated in the frame). This e-MTB is not only a great performer in amateur endurance competitions, but also a fun ride.

Each round of the Enduro events takes place over a weekend. The routes include a majority of technical descents with short, explosive climbs in the special stages, and longer climbs to reach the start of the timed special stages.

Stajvelo has chosen to use the Polini EP-3 motor on all its e-bikes, recently launched to the market and actually available to buy. […]