The founder of Electric Vehicles Outlook brand, Roger Atkins, published a new 40-minute documentary which looks at the future of Motorsport in the electric age.

Inspired by the more eclectic coverage of F1 in the Netflix ‘Drive To Survive’ series, Roger seeks to reveal the bigger picture aspect of what motorsport is all about.

Motorsport in the electric age 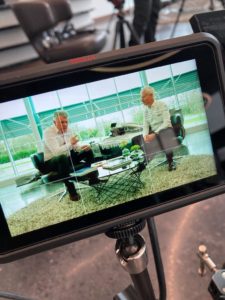 One of LinkedIn’s most influential voices on electric vehicles Roger Atkins asks that question – and lots of others about the future, as well as talking about the here and now.

As a motorsport fan, he wanted to understand what was happening behind the scenes, when it comes to reconciling the romance of the past with the realities of a rapidly changing world. Given privileged access to some of our best and brightest minds in racing he gives us an inside track as to how the technology and the business of racing might progress in a post combustion era…in the electric age.

With almost 300,000 followers of his long standing electric vehicle narrative, he perhaps surprisingly challenges the notion that the battery electric vehicle is a panacea in the shift to zero carbon mobility. His guests articulate the comparative technical merits of both Formula 1 and Formula E, as well as where solutions such as synthetic fuels might deliver. Inspired by the more eclectic coverage of F1 in the Netflix ‘Drive To Survive’ series, Atkins mini-documentary seeks to reveal the bigger picture aspect of what motorsport is all about.

Threaded through the film is the suggestion that we should avoid ‘throwing the baby out with bath water’ when it comes to the shift to electrification. Specifically, the quest to maximise efficiencies in multiple applications outside of racing is well within the grasp of these FI Tech Powerhouses, and there is realistic prospect that they will truly be part of the solution – and not face the prospect of being seen as part of the problem.

The recent F1 race in Hungary was undeniably an edge of the seat spectacle from start to finish, and with the current season now taking a breather during August, it’s perhaps the perfect time to reflect on what might happen next for a race series that delivers so much great entertainment, and much more besides. Just what ‘much more besides’ could be pops up quite a lot in Atkins story

Roger Atkins, Founder of www.electricvehiclesoutlook.com in conversation with:

Here you can see the video:

Mahindra Racing is the first Formula E team in history to receive Three-Star Accreditation, the highest accolade in the FIA’s framework. […]

The Formula E season so far: the final chapter in Montreal

Source: Formula E Montreal, Canada. 26th July 2017. The inaugural Hydro-Quebec Montreal ePrix brings the curtain down on the 2016/17 Formula E season. The third instalment of the all-electric street racing series brought about the […]