The third-last encounter of the Moto E season, the Austrian Grand Prix was won by Lukas Tulovic, who steps atop the podium for the first time since joining the series last year.

In this way, the young German rider gave Hervé Poncharal’s Tech 3 E-racing team their first win in the series.

Tulovic got off to a great start from second on the grid and pulled away in the early stages, but the race was far from easy to predict. While early front-runners Alessandro Zaccone (OCTO Pramac MotoE) and Hikari Okubo (Avant Ajo MotoE) slid down the order, Fermín Aldeguer (OpenBank Aspar Team), Dominique Aegerter (Dynavolt IntactGP) and a resurgent Eric Granado (One Energy Racing) – who was all the way down in 13th place on the grid – fought relentlessly on the track for one of the best battles ever witnessed not only in MotoE but in all motorcycle racing! 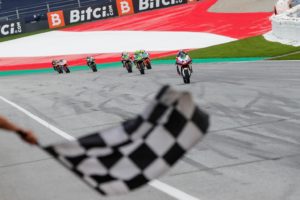 The three of them traded places several times and were often three abreast in the midst of battle, but it was Granado ultimately to get the better of the other two and edge away. Meanwhile, Tulovic in the lead made a couple of mistakes that reduced his margin at the front but it was not enough for Granado to get close enough to worry the German. Then, at the penultimate corner, Domi Aegerter made a decisive pass on Aldeguer to secure the last podium place at the line.

With Aldeguer fourth, fifth place went to Okubo, ahead of Alessandro Zaccone (OCTO Pramac MotoE), Jordi Torres (Pons Racing 40) and Matteo Ferrari (Indonesian E-Racing Gresini MotoE), who could not capitalise on a front-row start as he got caught up in traffic at turn one.

With only the two races at the Misano World Circuit left in the calendar, the battle for the title is as open as ever. Zaccone is still in the lead with a seven-point margin over Granado and eight ahead of Torres. Aegerter is now fourth, eleven points in arrears but ahead of Tulovic (-27), Ferrari (-32) and LCR E-Team’s Miquel Pons (-34).

Di Meglio fastest in the Energica debuts at Le Mans

In the first day of final event of the 2020 FIM Enel MotoE World Cup at Le Mans, the fastest has been French rider Mike Di Meglio (EG0,0 Marc VDS). […]