Zaccone has been held back by last-sector rainfall and allow Granado to win the E-Pole in the FIM Enel MotoE World Cup at the TT Circuit Assen.

Motorcycle racing is a matter of talent, but it requires a little bit of luck, too. And in today’s E-Pole at the TT Circuit Assen, luck was not on Alessandro Zaccone’s side as the current leader of the FIM Enel MotoE World Cup found himself riding on his Energica Ego Corsa under the pouring rain as soon as he entered the final split of his flying lap. The talented Italian rider managed to keep the bike upright and to contain the damage as he crossed the line in third place only 0.124secs away from pole. 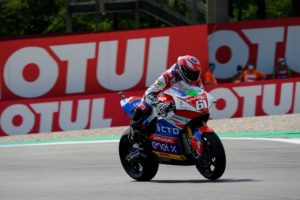 Pole Position then went to Eric Granado (One Energy Racing), who logged a 1’43.114secs lap-time to claim his sixth front-grid start in MotoE, the third this year. His lap-time turned out to be almost half a second slower than the current outright lap record set by Zaccone this morning (1’42.676), and this is mainly due to the drastic temperature change and the strong winds compared to FP3.

Joining Granado and Zaccone on the front row is Lukas Tulovic (Tech 3 E-Racing), a rider who has made a name for himself when it comes to single-lap performance, although he was among the many riders who had a moment while exiting the tricky turn five before heading onto the back straight. The young German rider now has a solid chance to claim what would be his maiden podium in the series and get his so-far sub-par 2021 season back on track. 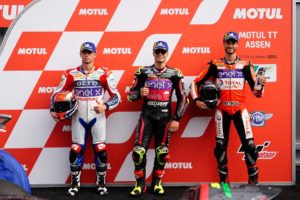 Row two will be headed by Jordi Torres (Pons Racing 40) with Dominique Aegerter (Dynavolt IntactGP) and Matteo Ferrari (Indonesian E-Racing Gresini MotoE) alongside him in fifth and sixth, respectively.

Energica extends partnership with MotoE while arrive to Le Mans

Energica will continue its partnership with MotoGP throughout 2022 as single manufacturer of Energica Ego Corsa, the electric motorcycle protagonist of MotoE. […]