After seven laps of adrenaline-filled action, Eric Granado (One Energy Racing) came out victorious courtesy of a masterful and very well calculated performance. After taking the lead back from Alessandro Zaccone (OCTO Pramac MotoE), the Brazilian rider carefully managed his half-second lead while battle raged behind him. 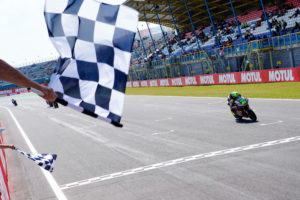 In the final moments of the race, reigning champion Jordi Torres (Pons Racing 40) looked at times capable of bridging the gap to the leader. But as the MotoE field entered the final lap, he had to defend second place from a resurging Zaccone, who re-found his mojo and attacked the Spaniard at turn ten, but then went slightly wide allowing Torres to sneak back in. The two were side by side at turn 11, and even had a small coming together, but incredibly enough Zaccone was able to avoid disaster and keep his Energica Ego Corsa upright – although that big moment cost him a final chance for second place.

After a challenging start to the year, the Indonesian E-Racing Gresini MotoE team can smile again thanks to 2019 MotoE title winner Matteo Ferrari, who put together an impressive performance after getting stuck in traffic at turn one. The young Italian rider was fourth at the finish line (his best result of the season so far) ahead of early race leader Lukas Tulovic (Tech 3 E-Racing) and Mattia Casadei (Ongetta Sic58 Squadracorse). 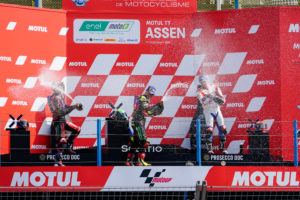 Drama unfolded at the end of the opening lap of the race as title contender Dominique Aegerter (Dynavolt IntactGP) crashed out at the infamous Geert-Timmer chicane. The experienced Swiss rider was able to pick up his damaged Ego Corsa and re-join the race, but his efforts were not rewarded with points as he crossed the line 18th.

With four rounds out of six completed, Zaccone still leads the title race, with Torres now in second position, seven points adrift. Granado moves up to third and is tied with Aegerter, 17 points behind the leader.

The FIM Enel MotoE World Cup will return to action in one and a half months’ time at the Red Bull Ring in Austria.

New international partnership until the end of 2022 between Energica Motor Company and Total Lubrifiants, that becomes the Official Sponsor and Industrial Partner. […]