World Cup Champion Matteo Ferrari (Team Trentino Gresini MotoE) was the fastest in qualyfying at Misano, but Mattia Casadei (Ongetta Sic58 Squadracorse) will be in E-Pole.

Matteo Ferrari claimed pole position in track aboard his Energica Ego Corsa #11 after starting the session last having topped the combined times of the three free practice sessions at the Italian track. His 1’43.580secs lap-time was almost two and a half tenths of a second slower than the current record at the track – set by the Italian rider himself earlier in the morning – but was still quick enough to edge the competition. 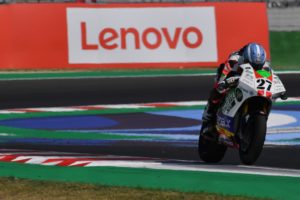 Ferrari will not be the rider lining up at the very front of the grid today, however. The standard bearer of Gresini Racing in the series has a three-position penalty to take following the crash he triggered at Jerez last month, so his place will be taken by the fellow Italian rider Mattia Casadei (Ongetta Sic58 Squadracorse), who looked extremely smooth and effective around his twisting home track.

The 21-year-old knew he was going to line up on the first slot of the grid when the lap set by Eric Granado (Avintia Esponsorama Racing) was cancelled as the Brazilian exceeded track limits while exiting the penultimate corner on the way of what could have been the best starting position for the race. Instead, the winner of the opening race of the season will now line up last at the opposite end of the grid.

A rejuvenated Xavier Simeon (LCR E-Team) and the youngest rider on the grid, Lukas Tulovic (Tech 3 E-Racing), therefore complete the front row, with Ferrari heading row two ahead of the current series leader Dominique Aegerter (Dynavolt IntactGP). ‘Domi’ did some good damage limitation riding considering this is his first racing weekend at Misano on the Energica Ego Corsa.

After showing some promising speed throughout free practice, Alex De Angelis (OCTO Pramac MotoE) had a nightmare lap with several wild moments that cost him the opportunity for a good qualifying result. Luckily enough, he managed to stay on the bike and will start the encounter from the 16th position on the grid. 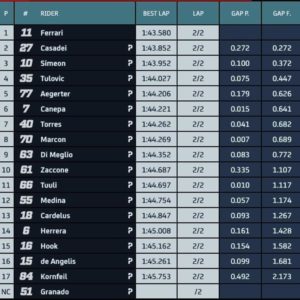