The final pre-season test at the ‘Circuito de Jerez’ in Southern Spain organized by Energica and the FIM Enel MotoE World Cup has been completed.

Now they are ready to tackle the opening round of the 2021 campaign, which takes place from April 31st to May 2nd at the same track. 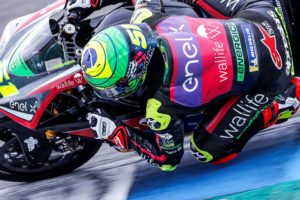 Riders and teams made good use of the track-time available to continue working on their Energica Ego Corsa machines and also had a chance to get a deeper understanding of race simulations, which took place halfway through day two. As witnessed at the previous test in March, two riders stood out from the rest of the field, although many other competitors were able to step up their game.

On the final day and on his very last attempt, Brazil’s Eric Granado (One Energy Racing) logged a 1’47.065secs lap-time to top the three-day combined timesheets and set a new ‘unofficial’ record of the Jerez circuit aboard an Ego Corsa machine. This bettered the 1’47.106 set by Dominique Aegerter (Dynavolt IntactGP) earlier the same day.

The Swiss rider had the upper hand the day before in the race simulation by dominating the encounter, although Granado apparently kept his cards close to his chest as he – just like Jordi Torres – chose to let their competitors through in the first corners to better focus on their race pace from the back of the field. 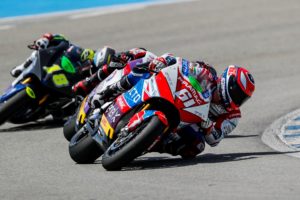 The former title winner in 2019 and runner-up in 2020, Matteo Ferrari (Indonesian E-Racing MotoE Gresini), had a tough time getting up to speed aboard his Energica Ego Corsa and finished only 12th, 1.6secs away from the top.

The Energica team will now return to their headquarters in Modena to prepare for the season opener.

Energica extends partnership with MotoE while arrive to Le Mans

Energica will continue its partnership with MotoGP throughout 2022 as single manufacturer of Energica Ego Corsa, the electric motorcycle protagonist of MotoE. […]