The first of three individual races for the FIM Enel MotoE World Cup at the Misano World Circuit delivered another superb show. 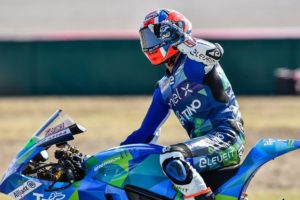 Matteo Ferrari crossing the line first for a very important win for his title defence, after the dramatic end of his race at Jerez last month. Aboard his Energica Ego Corsa machine #11, the local hero fended off a returning Xavier Simeon (LCR E-Team) in the final of seven laps after making his way from fourth to the lead in the second half of the encounter.

With this win, Ferrari reduces the gap to current series leader Dominique Aegerter (Dynavolt IntactGP) to 12 points, and gets his title campaign right back on track. The Swiss rider, on the other hand, rode a masterful race despite the little experience at this track with the powerful Energica motorcycle as he put a bold but clean manoeuvre to overtake Jordi Torres (Pons Racing 40) for third place, but was a little too far from Simeon in second. The standard bearer of Lucio Cecchinello’s MotoE effort rode a great race to claim his second podium in the series. 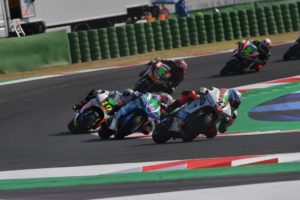 The six-way battle for the podium meant that some riders got the short end of the stick. The aforementioned Torres and Mattia Casadei (Ongetta Sic58 Squadracorse) saw their top-three chances disappear in a heartbeat not far from the finish line. They got to the flag in fourth and fifth, respectively, after the Italian led the encounter in the opening laps from pole position. There was a solid performance for Mike Di Meglio (EG0,0 Marc VDS) who showed glimpses of his 2019 self as he joined the leading group but was unable to get in the mix for the podium.

Granado’s comeback from the back of the field looked promising at the beginning, but once he closed in on the top ten the Brazilian was unable to progress further.

Energica and MotoE will return to the track next Friday for the second of two back-to-back weekends, with two crucial races before the season finale at Le Mans.