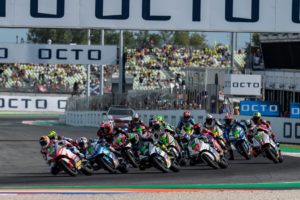 After successfully avoiding the early drama that occurred to first-race podium finisher Xavier Simeon (Avintia Esponsorama Racing), who crashed in front of him, Ferrari made the most of his competitive race pace to slowly increase his lead as the battle for the podium raged behind him.

In the meantime, Hector Garzo (Tech E-Racing) completed a jaw-dropping triple overtake for second place, while Canepa closed the gap for third on his LCR-liveried Ego Corsa machine. After dropping a few places in the battle for a top-three finish, pole sitter Alex De Angelis (OCTO Pramac MotoE) crashed out of contention once again after his similar opening-race setback. 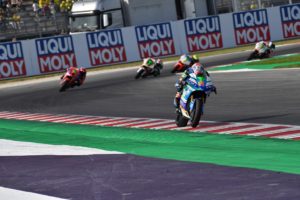 María Herrera (OpenBank Angel Nieto Team) completed the top-five in what was another excellent performance for the Spanish rider, who battled hard for the podium and crossed the line less than two tenths away from third place. 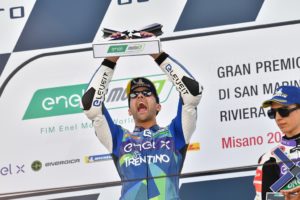 Energica and the FIM Enel MotoE World Cup will return to action on November 15 at Valencia’s ‘Circuito Ricardo Tormo’ for the final round of the season, which will feature again two MotoE races on the same weekend.

Di Meglio fastest in the Energica debuts at Le Mans

In the first day of final event of the 2020 FIM Enel MotoE World Cup at Le Mans, the fastest has been French rider Mike Di Meglio (EG0,0 Marc VDS). […]