Mahindra Racing confirmed that will be powered by ZF Friedrichshafen AG, while Jérôme D’Ambrosio and Pascal Wehrlein will be the drivers in Formula E season six.

At a special event in Germany were revealed the drivers, the M6Electro livery for season six, and also announced a the new long-term technology partnership.

The global technology giant is supporting Mahindra Racing’s season six campaign with chassis development work, shock absorber provision and engineering services while work is already underway for the design and manufacture of the electric driveline for the 2020/21 season. In addition to the electric motor, development includes both single-gear, highly efficient transmission and the matching power electronics. 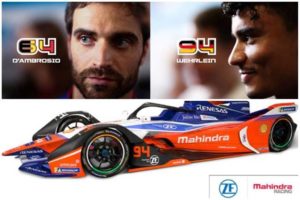 This work builds on ZF’s successful and race-winning work to date in the ABB FIA Formula E Championship through its E-Mobility division, which already employs over 9,000 people worldwide since its inception in January 2016.

In line with the new partnership, the ZF branding will adorn the M6Electro cars from this season onwards. This season’s livery is an adaptation and evolution of the popular and distinctive M5Electro. It was also unveiled in Germany and retains the familiar red, white and blue hues that has ensured it stands out from the crowd.

Nick Heidfeld will remain an integral part of the Mahindra Racing family and will continue in his advisory role and as the team’s official test and reserve driver. He drove the unraced M6Electro at the 2019 Goodwood Festival of Speed in the competitive Hillclimb – two years after claiming the open-wheel eRecord in the M4Electro.

Belgian racer Sam Dejonghe will also continue to work closely with the team in the position of reserve and sim driver.

I am thrilled Jérôme and Pascal will both return to the team for season six. Last season was one of the most challenging seasons in Formula E history in terms of competition but we believe we have one of the strongest driver line-ups on the grid to help us achieve our championship ambitions. I am also delighted to welcome ZF to the Mahindra Racing family. We now have one of the most successful global players in the field of e-mobility at our side. We were highly impressed by the performance of the ZF driveline in the most recent Formula E season and together we will be even better positioned to continue celebrating success.

Formula E is a great stage for ZF to demonstrate the quality and performance of our drivetrain solutions for the e-mobility of tomorrow. In no other racing series is the transfer of expertise from motorsports to volume production development as great as in Formula E. We look forward to a successful cooperation with Mahindra Racing, and also show our commitment to India as an important growth market.

Saudi Arabian Airlines is the official partner of Formula E

SAUDIA joins the ABB FIA Formula E Championship as part of long-term partnership ahead of first race in Ad Diriyah. The agreement has been announced on September 25th as a part of a new long-term […]