The Seat Apprentice School participated in the Kart Accademy at Barcelona-Catalunya circuit in Montmelò, finishing the race in the second place.

The project won an FP Emprèn ‘Industry’ prize and into the context the students had to create the project from scratch, designed, built and generate the financial support for the construction of electric kart.

They scooped the ‘Industry’ award for mid-degree students presented by FP Emprèn, an organisation which rewards vocational training schools in and around Barcelona. The team also participated in the Kart Academy, finishing in second place. 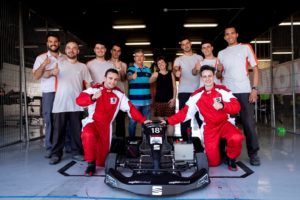 The ‘Industry’ category prize rewards middle-degree apprentices for the supervised creation of an electric kart. These students are in their second year of the Machining and Electromechanical Maintenance training cycles. The prize acknowledges the project that contributes the best quality and improvements to the industrial sector based on criteria such as coherence, viability, consistency and added value.

A further example of the validity of this electric kart is the result it obtained at last weekend’s Kart Academy, where the team came in second place in the competition, after experiencing engine problems in the endurance race but clearly outperforming their rivals in the other events.

According to Laura Carnicero, the head of training at Seat and director of the Apprentice School “the success of this electric kart project shows that the School teaches the necessary technological skills for the automotive industry of the future, enabling the students to become entrepreneurial, competitive professionals.”

The project was led by three students, but relied on the collaboration of other students who fabricated previously designed parts in the Seat production facilities. They were supervised by professors of the School during the entire process, who advised them on the technological solutions to implement in their kart.

The future of racing is electric

Students of the Apprentice School begin studying the technology that will be the backbone of the future of racing in their first year, which is the motivation behind developing a vehicle powered by alternative energy.

Prior to rolling their electric karts onto the Montmeló track for the Kart Academy competition, the students were given the opportunity to complete their final check-list in a specially prepared area in the Seat Barcelona facilities. 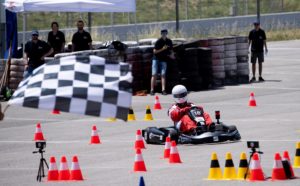 The Kart Academy is a competition among teams of students from automotive training institutes and schools in Catalonia. Their goal is to design, build and compete with a kart they themselves have developed, working together to comply with the rules and generate the necessary financial support to carry out their project.

The electric kart project is further proof that professors of the Apprentice School not only provide their students with the necessary tools to learn the techniques, but they also encourage them to develop a business model and launch a vehicle and get it ready for competition.

With this electric kart, the team finished in second place in the Kart Academy competition. Measuring 1.74 metres long and 1.36 metres wide, the kart is powered by a 5.5 kW engine and is equipped with a 48V battery. The competition programme featured braking, accelerating, endurance and slalom and gathered teams from a dozen training schools in the area of automotives.

Road safety for children… and more

The eKid Car is an electric car prototype for children, which was designed and built by students of the School for the purpose of carrying out road safety courses. The prototype is in its final development stage, and once finished, will be scaled up to a fleet size of electric cars to be used in road safety education for children.

AGV Low Cost is the name of an autonomous, battery-powered compact electric tractor which has also been built by students. The aim of this project is to pull heavy carts loaded with logistic material around a closed circuit using a self-driving system for autonomous operation. The project originated in the needs of Seat’s logistics department.

Starting this academic year 2018-2019, the Seat vocational training centre is completely overhauling its training programme, switching from middle-level Vocational Training courses to a wider range of Advanced Degree courses that are tailored to the needs required by the transformation of industry and digitalisation. While the average training courses in Spain feature a total of about 2,000 hours, the SEAT Apprentice School offers almost 5,000 class hours, which makes it possible to include a large amount of latest technology subject matter.

It has already started the registration for the German Electric Kart Championship [DEKM] 2020 and Promoter Oliver Schielein talks about it in the interview. […]