The 2020 FIM Enel MotoE World Cup has taken yet another unexpected turn in the penultimate race of the season, a crucial achievement in light of the fate that awaited his main rivals for the title. 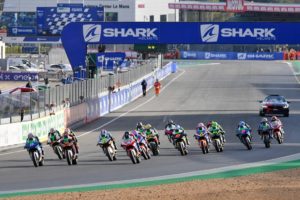 A few corners into the race, Mattia Casadei’s crash led to a red flag, with the standard bearer of Ongetta Sic58 Squadracorse team unable to restart after his fourth tumble of the weekend. As the new, five-lap encounter got underway, a domino-style collision triggered by Xavier Simeon at turn two also sent Dominique Aegerter (Dynavolt IntactGP) and his LCR E-Team mate Niccolò Canepa to the ground. At the following corner, reigning World Cup Champion Matteo Ferrari lost the rear and crashed out from the front, handing a handsome lead to his Spaniard rival. Aegerter was able to re-join to finish fourteenth, and he is now 16 points in arrears of the new leader Torres and two behind Ferrari.

Jordi’s race did not turn out to be a walk in the park, however, as Mike Di Meglio (EG0,0 MarcVDS) and Niki Tuuli (Avant Ajo MotoE) managed to bridge the gap to the Spanish rider, with the Frenchman trying to line up a pass in the final two right-handers, but it was all a little too late. Tuuli made his return to the podium for the first time since the very first race in the history of the series at Sachsenring, when he claimed top honours.

Josh Hook (OCTO Pramac MotoE) was fourth, with Tommaso Marcon (Tech 3 E-Racing) winning the battle for fifth against Eric Granado (Avintia Esponsorama), who was starting from the back of the grid. Maria Herrera and Alejandro Medina (OpenBank Aspar Team) crossed the line in seventh and eighth, with Alessandro Zaccone (Team Trentino Gresini) and Hook’s teammate Lukas Tulovic completing the top-ten.

The final race of the 2020 FIM Enel MotoE World Cup will get underway today Sunday afternoon at 15:40 local time (GMT +2).