The course has been set for BMW to join the FIA Formula E Championship as an official manufacturer with a works team in Season 5.

In an interview, BMW Motorsport Director Jens Marquardt and MS&AD Andretti Formula E CEO Michael Andretti talk about the close partnership and their expectations for the future of Formula E. In a relaxed discussion, they also chat about their personal interests away from motor racing. 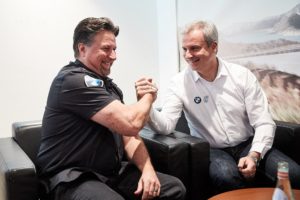 Mr Marquardt, Mr Andretti, Season 4 of Formula E is already underway. What are your goals with the MS&AD Andretti team?

Michael Andretti: “Our goal is obviously to do better than in the past. Last year was not the best for us. I hope we can improve on that. A realistic goal would be top-five finishes, if we can get there. Maybe we can also pick up the odd podium here and there if things work out.”

And from a BMW perspective?

Jens Marquardt: “We are obviously immersing ourselves even deeper into Formula E this year, and will be more heavily involved in the MS&AD Andretti Formula E team. We have three employees working full-time with the team this season. We are also supporting wherever and however we can to extract the maximum out of the package, together with the drivers. It goes without saying that we are also using our resources back in Munich. At the same time, we at BMW Motorsport and BMW i are obviously also gathering information, which will help us to develop the powertrain for Season 5. That programme is running parallel to this.”

Michael, you have been actively involved in Formula E from day one. How has the series developed in that time?

Andretti: “It is fantastic to see how the dream of Formula E founder Alejandro Agag has become reality. His vision was for Formula E to offer companies like BMW a stage on which to compete against other manufacturers out on the racetrack. He has achieved that. It is a great honour for us to have been involved from the outset. We are a part of the future of motor racing.”

Jens, did you believe that the series would develop so well?

Marquardt: “Yes, I did. And it was also important that BMW was involved from the start as Official Vehicle Partner of the series. There were obviously a few things that we discussed with Alejandro and his guys. Our involvement was dependent upon a few changes being implemented in Formula E. The roadmap that Alejandro drew up, with all the technical steps, actually happened. That simplified our decision to be involved as a manufacturer out on the track. We then found a team, in Michael’s outfit, which operates at a top level in motor racing and has a wealth of Formula E experience. That was really an ideal scenario for us. Taking this partnership to the next level working together in Season 4, while at the same time looking ahead to Season 5, is very exciting for all of us.”

You have both experienced motorsport in many different racing categories. What do you find so fascinating about the Formula E project?

Andretti: “For me personally, it is primarily the venues. I am really impressed when we arrive at locations like New York, Paris, London and Hong Kong, where other racing series have been trying to race for decades. It is amazing what Alejandro and his team have achieved.”

Marquardt: “For me, it is more the technological side of things. In the past, we have often spoken about transferring things from motor racing to the production side. 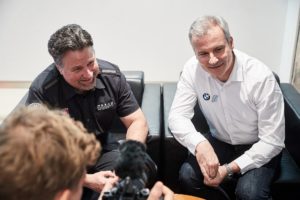 Never has that applied more than in Formula E. Here, we have a real tech lab for our production technology. Everything we do here is cutting-edge technology. We have exactly the same engineers as developed the BMW i3 and the electric powertrain for the BMW i8. We told them: ‘forget all the boundaries you normally have to consider in development, and just focus on performance, maximum efficiency, lowest weight, and the best overall package’. Once we have achieved that point, we will consider how exactly we can integrate that in production – for example, for the BMW iNext models and all future BMW i models. For us, this is the perfect realisation of our motto: from the racetrack into the street car.”

Andretti: “I have always followed what BMW Motorsport have done, and they win in everything they do. Our team already has a strong partner in Formula E, in MS&AD, with whom we work together superbly. The fact that we are also constantly stepping up our collaboration with BMW is a fantastic situation.”

Jens, you have worked in the USA for many years. Did the name Andretti already have special meaning for you?

Marquardt: “Yes, it really did. But that goes a long way back. I don’t think Michael actually knows this story. As a ten-year-old, I always used to race my brother to school on our bikes. He was always Jackie Stewart, I was Mario Andretti – because Michael’s father used to drive that beautiful black and gold John Player Special Lotus. I even won a few races to school as Mario Andretti. I came to America in the late 1990s, where I was involved with IndyCars, in which Michael was a hero. He won a lot of races, including many against the team I was working for. This family name – and Michael himself, with everything he has achieved: you don’t find that kind of thing very often in motorsport.”

How well do Germans and Americans work together?

Andretti: “I think it works well. Sure, the cultures are a little different, but we are all racers in the end. That is what it is all about, so we speak the same language in that regard. We have seen for a few years, with our partner MS&AD Insurance, how well different cultures can complement each other in motor racing.”

Marquardt: “I think we complement each other very well. What Michael and his guys bring to the party, combined with the sometimes rather stubborn and tight German approach really works well, because you need both to be successful. It is true that the cultures differ a little, but at the end of the day we are united by the passion we share for racing.”

What is your roadmap for Season 5? Is there a BMW roadmap and a team roadmap?

Andretti: “That is already all together. At the moment we are working very hard together toward the powertrain for Season 5. At the same time, we are also working to be as successful as possible this season with the MS&AD Andretti cars. The roadmap is the same on both sides.”

Marquardt: “It is really a challenge, and is probably more difficult for Michael and his team at the moment than it is for us at BMW. They have to be fully focussed on Season 4, the racing side of things, while at the same time setting up the tests for the new car, as soon as it is ready. Development of the powertrain is currently mostly done in Munich. However, from next year we will work even closer together on the test and development side. The goal is to have maximum performance and efficiency from the start of Season 5.”

The next race will take place in Marrakech. Is driving in Africa special? Are you looking forward to it?

Andretti: “I love the fact that the series races on so many different continents. It is cool to head from Hong Kong to Marrakech, then on to South America. And we are not just going anywhere in these countries, but to the very heart of them, to the city centres. That is what makes Formula E so unique.”

Marquardt: “The outing in Africa just goes to show that Formula E is a truly global series. At the same time, it also says that E-mobility is global. The major cities of this world, no matter which continent they are on, will be electrified in the near future. BMW, as a global player and pioneer, has to be involved. We are looking forward to appearing in Marrakech in January, then on to South America, North America and Europe.”

What is the biggest challenge you face running a racing team?

Marquardt: “And then keeping them motivated, sharp and ensuring their hearts are in it – through the good times and the bad.”

What job would you do, if you were not in motor racing?

Andretti: “Honestly? I have no idea. I really don’t know what I would do. I am very lucky to be able to do what I love.”

Marquardt: “I would probably be a teacher.”

Which is your favourite racetrack?

Andretti: “Spa is my favourite racetrack.”

Marquardt: “I agree. It is a manly track. Michael knows it as a racing driver, I know it as an engineer. It is a natural track, and a real challenge for every driver.”

What is your biggest success to date?

Andretti: “When I came back from Formula 1 and won the very first IndyCar race back in Australia. That was a big moment for me.”

Marquardt: “Obviously 2012, when we returned to the DTM with BMW and won all three championships in the first year back.”

Which is your favourite car, or racing car?

Andretti: “Racing car… I would have to say the Lotus 79, with which my father won the Formula 1 World Championship. That car was just beautiful.”

Who, in your opinion, is the best racing driver you know?

Andretti: “My father, Mario, was always my hero. Nobody has achieved what he has achieved: winning in every category he has driven in. I don’t think that will ever be repeated.”

Marquardt: “For me, it is Jackie Stewart. I have met him a few times, and was very impressed with how reserved he was.”

Which is your favourite airport?

Marquardt: “Munich. I associate it with home.”

What is the most important thing in life?

Travel by plane or car?

Andretti: “That is easy: plane.”

Marquardt: “That depends on the distance. Within Germany and neighbouring countries, I obviously prefer our BMW vehicles. The plane then comes into play on long journeys.”

Andretti: “Depends on the situation.”

Marquardt: “Mineral water, if I am driving.”

Marquardt: “Beer on normal days, champagne when I am celebrating a win with Michael.”

Marquardt: “Soccer, by a mile.”

Andretti: “Hiking for me too.” 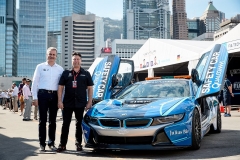 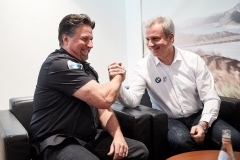 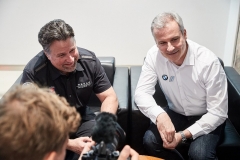