The Jaguar I-PACE eTROPHY returns for season two this November as the Official support series to the ABB FIA Formula E Championship.

The all-electric Jaguar I-PACE eTROPHY series will compete in 10 rounds on street circuits across the world  in eight countries, three continents and eight months. 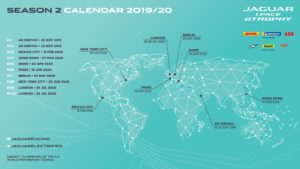 The most important new for season two and following successful implementation in Formula E is “ATTACK MODE” providing  a boost of additional power to enhance the thrilling racing.

It’s exciting to look forward to season two of the Jaguar I-PACE eTROPHY and reveal the exciting locations for our second year. New for season two is the London double-header which is a fantastic opportunity to race the I-PACE eTROPHY twice in front of our home crowds. We are also excited to bring “ATTACK MODE” to the series. It has been a big success in Formula E and I am sure it will also inject even more excitement into eTROPHY.

Michelin will be partner of Jaguar I-Pace eTrophy

James Barclay, Jaguar Racing Team Director, revealed at Autosport International in Birmingham that Michelin will provide tyres for all 20 Jaguar I-Pace eTrophy racecars at each round of the world’s first international championship for production […]