Energica and the FIM Enel MotoE World Cup stole the show at Le Mans in what was arguably the best race of the FrenchGP.

Granado claimed a hard-earned win after a series of brilliant overtaking manoeuvres – the last of which was on the then-leader Alessandro Zaccone (OCTO Pramac MotoE) at the penultimate corner. Zaccone, however, did not make life easy for the eventual winner as he immediately passed him back at the last turn but ran wide – too wide – and was demoted to third by race direction as he exceeded track limits. 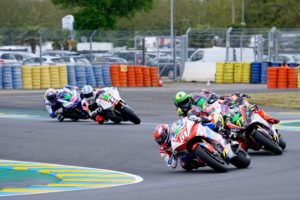 The race winner at Jerez did an absolutely stellar job in the early moments of the race as he took the inside line for a multiple-rider overtake at turn two – followed by a great save from a near high-side moments afterwards.

Second place went to Mattia Casadei (Ongetta SIC58 SquadraCorse), who made the most of the heated battle ahead of him to recover a handful of positions before the race entered its final stages. There was some disappointment for Dominique Aegerter (Dynavolt IntactGP), who spent most of the race in second position but could not fend off the attack from a resurgent Granado, and then dropped one more position to Casadei on the final lap.

Lap four was the first major turning point of the race, as previous leader Hikari Okubo (One Energy Racing) had a coming together with Fermin Aldeguer (OpenBank Aspar Team), and the two went down. The Japanese rider, after seeing his front-row start taken away by race direction yesterday at the end of the E-Pole, showed great speed and confidence aboard his Energica Ego Corsa #78 and went from 10th on the grid to the lead in three laps before disaster struck. Aldeguer was able to re-join the race and was fifteenth at the finish line. 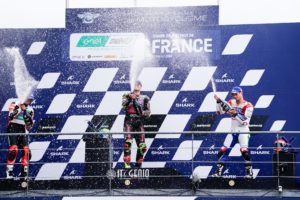 Fifth place went to the ever-consistent Jordi Torres (Pons Racing 40), ahead of Yonny Hernandez (Octo Pramac MotoE), Lukas Tulovic (Tech 3 E-Racing) and Matteo Ferrari (Indonesian E-Racing Gresini MotoE). Tulovic and Ferrari both looked great in the first half of the race, with the German running as high as third, as did the winner of the 2019 title.

The top ten was completed by home rider Corentin Perolari (Tech 3 E-Racing) and Maria Herrera (OpenBank Aspar Team). Miquel Pons (LCR E-Team) and Andrea Mantovani (Indonesian E-Racing Gresini MotoE) did not make it to the starting grid as they both crashed on the sighting lap.

With two races out of seven completed in the 2021 FIM Enel MotoE World Cup, Zaccone is still in the lead with 41 points, followed by Casadei and Aegerter in second and third (-8). Today’s winner Granado moves up to fourth place with 28 points, one ahead of reigning World Cup Champion Torres.

MotoE action will resume on June 4th at ‘Circuit de Barcelona-Catalunya’ in Spain.