The Brazilian Eric Granado exploited all the Energica Ego Corsa potential to take a dominant win in the first race of the 2020 FIM Enel MotoE World Cup. 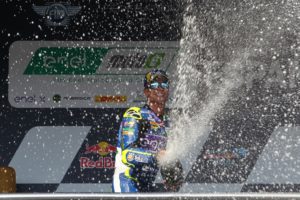 The standard bearer of the Avintia Esponsorama Racing placed himself at the front of the field after displacing early leader Lukas Tulovic (Tech 3 E-Racing) before the end of the first lap and checked out, at one point lapping a whole second faster than his pole position time. Eric crossed the finishing line unchallenged with a three-second margin over Matteo Ferrari (Team Trentino Gresini MotoE).

The current MotoE title holder got caught in an early battle which cost him some ground but, as often happens with the Rimini-born rider, he kept his composure and progressed. He went from fourth to second place with two perfect overtaking manoueuvres – first on Alejandro Medina (OpenBank Aspar Team) and then on the penultimate lap on the aforementioned Tulovic.

The young German rider rode a great debut race in the series but was eventually edged out by the fellow rookie Dominique Aegerter (Dynavolt IntactGP) who made his way up from seventh place to clinch a well deserved podium finish to begin his MotoE title quest. 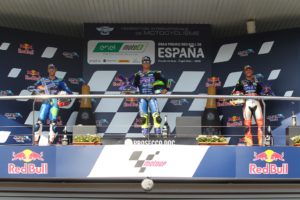 Behind Tulovic in fourth, Mattia Casadei (Ongetta Sic58 Squadracorse) edged out Jordi Torres (Pons Racing 40) for fifth, with Medina, Xavier Simeon (LCR E-Team), Josh Hook (OCTO Pramac MotoE) and Mike di Meglio (EG 0,0 Marc VDS) completing the top 10. Hook’s teammate Alex De Angelis had his race ruined due to a jump start, which was penalised first with a double long lap and then with a 21-second penalty at the end of the race.

Energica will now begin preparation for the second of two back-to-back rounds at Jerez, which will begin on Friday at the Andalusian venue. 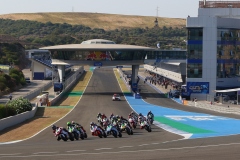 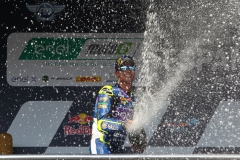 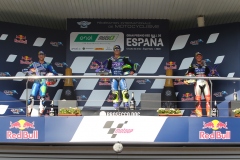