Jakarta hosted the nine round of ABB FIA Formula E World Championship, a big challenge for the Michelin Pilot Sport EV tires for the weather conditions.

The race in Indonesia was the ABB FIA Formula E World Championship’s first visit to Asia since the last round it organised there, in Sanya, China, in March 2019.

The Jakarta E-Prix was consequently viewed as a sign of a return to normality in the wake of the Covid pandemic. It also marked a return to venues known for their harsh weather conditions, and the heat and high humidity levels were a novel experience for many of the drivers, and even some of the teams. 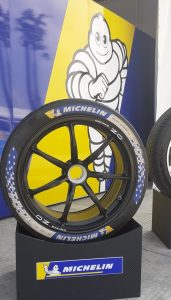 The last time the series had had to contend with a comparable situation was back in the 2014/2015 and 2015/2016 seasons when the first-generation car was still active. The two e-prix held in Malaysia are vividly remembered by the championship’s ‘veterans’ due to the air and track temperatures of around 40°C and 50°C they had to face at the time, not to mention humidity levels in excess of 95 percent!

The 2.37-kilometre, 18-turn circuit that hosted the street race in the Indonesian capital threw up an additional challenge, namely its brand new asphalt surface which Michelin technicians described as the most abrasive ever seen in the history of the all-electric series! The track also turned out to be particularly bumpy which added a further difficulty, but Michelin’s Formula E tyre rose to the situation with ease.

Many of Formula E’s previous 92 races have taken place in extreme conditions, from bitter cold to searing heat, rain, a sandy top-coating and humidity, but each time the successive generations of Michelin’s Formula E tyre have taken them in their stride. 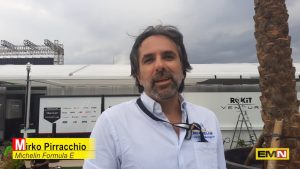 For sure, Jakarta was uncharted territory for us but we predicted it would share a number of features with other Formula E venues like Valencia [Spain] and Santiago [Chile] – says Mirko Pirracchio, the manager of Michelin’s Formula E programme. That said, we hadn’t been expecting the surface to be so abrasive. The fact that the drivers weren’t allowed to run more than eight tyres in such harsh conditions meant we had to pay close attention to the weather and rising track temperature which climbed to more than 50°C. Obviously, all this had an impact on the teams’ tyre strategies. Thanks to the sensors that are embedded inside all our Formula E tyres, though, we knew exactly what pressures the different cars were running in real time. That was a huge help, not only when it came to optimising performance but also in terms of safety and making sure the technical regulations were complied with. Thanks to our extensive experience of Formula E and the technologically-sophisticated tyres we have developed for the street circuits visited by the championship, the drivers were able to push hard with complete peace of mind in Jakarta. Indeed, they all praised our tyres’ consistency and longevity after the race, and that notion of trust was doubly important today because nobody had really known what to expect. We are delighted that we were able to provide them with the confidence they needed.