Formula E will begin the World Championship at Diriyah E-Prix with a two night races and Public Investment Fund (PIF) will be a local partner.

CBX, the Riyadh-based promoter of the Diriyah E-Prix and for the ABB FIA Formula E World Championship in the Middle East, announced that as a Local Partner, PIF branding will feature prominently on the track and across Diriyah E-Prix race communications.

Formula E was one of the first major global sports to make the Kingdom its regional home, when it entered a 10-year agreement with the Ministry of Sport and Saudi Automobile and Motorcycle Federation in 2018. Since then, the Diriyah E-Prix has played a significant part in realising the Vision 2030 programme of renewal to support a thriving economy and a thriving, ambitious society for the future. 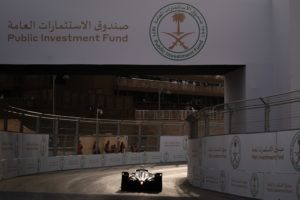 PIF’s continued partnership with Diriyah E-Prix confirms the prominence of the event in Saudi Arabia’s evolving sporting, social and business networking calendar. As the driver of the country’s economic transformation in line with Vision 2030, the Fund has contributed in developing the Saudi sports and entertainment industries.

Through its 2021-2025 Strategy, which was launched globally in January, PIF will expand on the significant progress made over the past four years to build a world-class portfolio by capturing attractive, long-term investment opportunities across diverse industries and asset classes. Between 2021 and 2025, PIF will focus on enabling 13 vital and strategic sectors locally that have been prioritized for development through Vision 2030, including leisure and sports.

We are delighted to welcome PIF back to the Diriyah E-Prix, which is a strong show of faith in the format of the event that we have developed to create a safe and entertaining experience around the sporting spectacle. For the first time in its history, Formula E will race at night, using the latest low consumption LED technology which will utilise less than 15% of the power used at other motorsport events staged at night.

Together with the Ministry of Sport, the Saudi Automobile and Motorcycle Federation and the organisers of the ABB FIA Formula E World Championship, the E-Prix remains a showcase for Vision 2030 and the new trajectory for the Kingdom established by the Crown Prince, His Royal Highness Prince Mohammed bin Salman bin Abdulaziz Al Saud.

When Formula E came together with the organisers in Saudi Arabia, our shared goals of maximizing sustainability and clean energy to create a spectacular sporting occasion was immediately obvious. In what remains a challenging time for the world, I am delighted that the Diriyah E-Prix will once again create a unique spectacle with our first night race, and the return of PIF is an enormously valuable endorsement of what we have created together.

The inaugural Diriyah E-Prix was the Kingdom’s first major international event and later this month it will be the first ever night race for the all-electric ABB FIA Formula E World Championship – an achievement we’re very proud of. The overall success of the Diriyah E-Prix includes many factors, one of which is the commitment of local sponsors who embrace the journey Saudi Arabia is on, and who understand the Kingdom’s commitment to renewable energy and the future of sustainable technology.

The Public Investment Fund is one of the largest and most impactful sovereign wealth funds in the world, driving the economic transformation of Saudi Arabia for the benefit of its people while helping shape the future global economy.

PIF is building a world-class portfolio through investments in attractive, long-term opportunities across diverse industries and asset classes internationally, while unlocking new sectors at home. PIF works alongside global strategic partners and renowned investment managers and acts as the Kingdom of Saudi Arabia’s primary investment arm aiming toward generating long-term value for the Kingdom of Saudi Arabia in line with Vision 2030.

The official Mercedes statement about entry into Formula E

Mercedes‑Benz commits to Formula E, departs DTM Formula E entry for Season 6 in 2019/20 DTM departure at the end of the 2018 season Toto Wolff: „Our years in the DTM will always be held […]