Extreme E confirmed the third of its five race locations that will be in Saudi Arabia, the desert leg of the new electric rally series, while a number of potential routes currently being examined.

One of the major cornerstones of this revolutionary championship is that we will race across terrains and environments that will push the world’s top drivers, teams and engineers to their absolute limits – said Agag.

For our Desert location, we are taking a real leap into uncharted territory. Heading to Saudi Arabia, home of the world’s largest continuous sand desert among a multitude of extraordinary environments in which to race, gives us unbelievable scope to create an unprecedented challenge for our competitors.

The Kingdom’s terrain is stunning and unforgiving, while the heat and conditions will be intense. There is no question that the winning combination of driver and machine will be a deserving one.

The exact desert location in the Kingdom of Saudi Arabia will be determined in the coming months. The main priority is to race in an extreme desert environment, where electric SUVs can show their capacities to race under the harshest conditions. 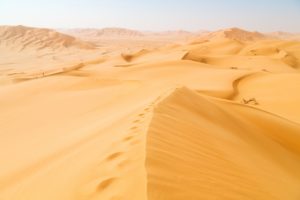 The Kingdom of Saudi Arabia has committed itself to world-leading investment in sustainable technologies and the protection of its unique natural resources. Vision 2030 focuses on reducing the dependence on fossil fuels, and includes an extremely ambitious deployment plan of renewable energies, particularly solar and wind.

Welcoming Extreme E to Saudi Arabia is the perfect opportunity for the country to strengthen the sporting pillar of its Vision 2030 – delivering world-class electric motorsport to the desert. I am a racing driver myself, so the notion of contributing to the growth of the sport – and its electric future – is a source of great pride.

Of equal importance is the benefit we will reap from this partnership in creating a lasting legacy, not only for motorsport in the Kingdom but for the protection of our unique ecosystems. Extreme E is a revolutionary global spectacle and one that everyone in the Kingdom of Saudi Arabia will be able to enjoy, with benefits that transcend beyond the sporting appeal to generate a positive impact in wider society. The championship is a unique prospect and, combined with the natural beauty and backdrop of Saudi Arabia, we are sure that fans all around the world will enjoy the result.

Extreme E is a pioneering new series and we are proud to host the championship in the country – and the Middle East region for its inaugural 2021 campaign. There is a rich and passionate motorsport audience within the Kingdom, and being able to welcome a new world-leading series with renowned drivers, manufacturers and cutting-edge technology into the fold will only serve to bolster that passion and heighten awareness of sustainable technologies and behaviours as we seek to protect Saudi Arabia’s outstanding natural beauty and our planet at large.

Saudi Arabia is the third confirmed Extreme E location, with Greenland set to host the Arctic stage and the Amazon Rainforest in Para, Brazil, the Rainforest round. An Ocean location and a route in the Himalayas are currently being scouted, with Season 1 to get underway in February 2021.

Extreme E events will take place over three days, within an area no larger than 10 km2. Track designers have been tasked with carefully selecting course options, which provide the most challenging, exciting racing action whilst crucially generating no negative impact from either environmental or social perspectives. Routes will be designed to incorporate existing obstacles and features with elevation changes and jumps, without the need to adapt the environment.