The 2021 FIM Enel MotoE World Cup is about to get underway from tomorrow at the ‘Circuito de Jerez Angel Nieto’ in Southern Spain.

After two official three-day sessions performed in early March and mid-April, the 18 Energica Ego Corsa machines are ready to storm once again around the technical and fast-flowing Andalusian circuit.

Three half-hour free practice sessions (two on Friday and one on Saturday morning) will allow teams and riders to prepare for Saturday’s single-lap E-Pole and for Sunday’s race, which will be contested over an improved eight-lap distance. 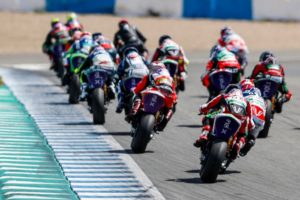 Reigning MotoE World Cup champion Jordi Torres (Pons 40 Racing) will try his best to defend the title earned last year, but on paper it will not be an easy task for the experienced Spanish rider. Two riders have in fact shown a good degree of dominance so far in 2021, something that did not come as a surprise given their performances in the previous editions of the series: new signing of team One Energy Racing’s Eric Granado and second-year rider Dominique Aegerter (Dynavolt Intact GP) have rewritten the unofficial lap track a few times before the end of the April test, with the quickest one now being a 1’47.065 set by the Brazilian star on the final day.

All the aforementioned riders will be in ‘good’ company, though, as rookies Fermin Aldeguer (OpenBank Aspar Team) and Miquel Pons (LCR E-Team) have shown great speed in their first outings aboard their stunning Energica motorcycles, while it is also expected a return to top form by 2019 title winner and 2020 runner-up Matteo Ferrari (Indonesian E-Racing Gresini MotoE). Many other riders will join the battle at the front in what is going to be an electric opening round of the series.

Jordi Torres won in the MotoE race 1 at Le Mans