On May 15th, 2014, ABT Sportsline team received at Donington the chassis n° 20, the first chassis for racing in the fully electric racing series.

The track record to date: in 54 races, the German squad has won 39 trophies, scored 1,027 points, and as a result, has been the most successful team in the international field so far.

A short ceremony with Formula E’s founder Alejandro Agag, a press conference with the ten team principals and a group photo in front of the then headquarters at the race track in Donington in the late afternoon: the handover of the first chassis to the teams five years ago rang in the era of fully electric motorsport. Audi Sport ABT Schaeffler has been involved in the series ever since: as a privateer team in the first three seasons and as an Audi factory team since the fourth season.

This day marked the official launch. A theoretical project we’d been planning on paper for many months at home became a reality – says Thomas Biermaier. ABT Sportsline’s Sport Director, together with Team Principal Hans-Jürgen Abt, was in charge of the German squad at the time. For all of us, it felt a little like the first day at school: everything was new and a little uncertain, but the thrill of anticipation was huge.

The first chassis that was handed over to Audi Sport ABT Schaeffler on May 15, 2014 was designated as number 20 – and has an eventful history: with Chassis 20, Lucas di Grassi crossed the finish line in Beijing on September 13, 2014 as the winner of the first-ever Formula E race. Chassis 20 also had to endure occasional pain: on October 9, 2016, di Grassi destroyed the entire left-hand side in a crash in Hong Kong, and repairs were also necessary after a wiring fire in Punta del Este in 2015. Chassis 20 celebrated its last victory in New York on July 14, 2018 and was handed over to Alejandro Agag as a museum exhibit after the season.

Formula E saw an outstanding development in its initial years – with both, thrilling racing and many innovations off the race track – says Head of Audi Motorsport Dieter Gass. In 2014, Audi was the first German automobile manufacturer to enter the series with a factory-backed commitment.

That so many brands are involved now and more will be joining soon is a nice confirmation of the pioneering spirit of Formula E and its founding members.

For Audi Sport ABT Schaeffler, the delivery of the first in a total of four cars also marked the beginning of a period of intensive work – in Formula E’s first four years, there were two cars per driver and a mid-race car swap.

We immediately dismantled the first car in order to precisely determine what equipment and what tools we needed in order to run it – after all, we only knew the car from drawings before – says Thomas Biermaier.

His squad moved to Donington for three months to prepare the cars before the pre-season tests and the season opener.

In the 54 races held so far, Audi Sport ABT Schaeffler has won 39 trophies – more than any other team – and has been the first squad to have broken the mark of 1,000 points, scoring a total of 1,027 points. In the third season (2016/2017), Lucas di Grassi became Formula E champion for the first time after a third and a second place in the two previous seasons. In the fourth season (2017/2018), Audi Sport ABT Schaeffler celebrated the title in the teams’ classification.

With eight different winners in nine races, the title race in the current season is as open as never before. The tenth round and 55th race in the history of Formula E will be held in Berlin on May 25. 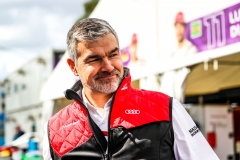 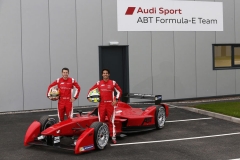 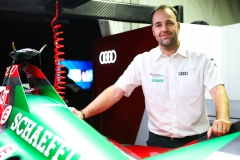 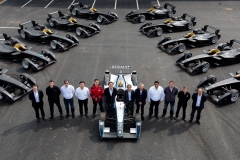 Audi in seconda fila a Shanghai