In the interview Christian Silk speaks about the Diriyah E-Prix, the new Team structure and preparation plans for the Rome E-Prix.

Christian Silk: I think that the ‘NIO Formula E’ team had always been very strong with a good sound engineering basis as you would expect of a professional racing team. Unfortunately, over the years there were a few wrong decisions taken in terms of powertrain and control systems and, in a championship dominated by both of these systems, these decisions hurt us massively.

For Season 6, and as 333 Racing, we were very much in a transition year, trying to recover from these points with minimum time to do so. It was therefore a case of getting a car on the grid that was safe and reliable without having much time to spend on developing its performance. Now for Season 7 we have had another year to develop our systems and that is starting to show with the improved performance. However, we know that we still have some way to go. As a team we have a lot of experience and I believe we know what is required, but we are still suffering a little from the consequences of earlier seasons.

As well as changes in hardware, there have been some changes in staff, some due to natural wastage and some due to the changes in the situation of the team. We have kept our strong engineering backbone, but have also managed to strengthen ourselves in other key areas. For me it is very important that we foster an atmosphere within the team that people enjoy and can give their best in. We focus on the psychological wellbeing of our drivers, but the whole team needs to be mentally and physically at its best. As a team we need to support each other when things are difficult and congratulate each other when things go well. There is a saying that surviving difficult times makes you stronger – if that is the case we should be the strongest team out there! I am not so arrogant to say this (although as Team Principal I obviously believe it), but I will say that we are a small, very closely knit unit where we respect each other and are all pushing for success. In Diriyah I had several team members come to see me to say how much they enjoy working in the team and this is what I am looking for – a team where people can give their best because they enjoy it and want to, and in that way we will attract the best people.

What are the main changes made to the NIO 333 FE 001 car since last season?

CS: It seemed very clear where the car was lacking performance up to this season and hence it was these areas we had to concentrate on. Given what happened in Season 6 we effectively had to complete two years development in a single year. Obviously, that is a very tall order for a small team, but we have taken a very significant jump forward and will continue to do so as the season progresses.

However, what motorsport teaches you is to never take anything for granted, so whilst we believe we know where our main focus will be rest assured we will continue to reassess this and, if required, we will move resources around as the car develops. To be successful in motorsport you really need to be strong in all areas and obviously this is what we are aiming for.

To allow us to continue the development of the car we are working with new partners to give us not only added resource but also fresh thinking. We have developed our own powertrain as a result of this, which we will go into more detail about over the coming weeks, and are also expanding our relationship with Gusto Engineering. Although perhaps not so well known in Europe, Gusto is well known in Asia with a proven track record and they will certainly help us to achieve our goals by being involved in project management and technical exchange between China and the team in the UK.

What are the NIO 333 FE Team’s aims and objectives for Season 7?

CS: Our target is to be a consistent points scorer, that is clear, and we work very closely with Li Sheng Racing (LSR) who is driving the team’s strategic direction. Obviously our results at Rounds 1 and 2 in Diriyah were good, but we now need to carry that into the rest of the season. I don’t think our car was particularly suited to the Diriyah track layout, brilliant though it is, so I am hopeful we can keep, or even improve on, our level of performance at more typical Formula E street circuits. We need to be consistent, extract the maximum from the car and be ready to attack when other teams run into problems. That might not sound nice, but this is racing!

Summarise how the team is feeling after the opening rounds of the season in Diriyah?

CS: The results of Diriyah are a vindication of the hard work from everyone. We want to enjoy our motorsport and certainly that is much easier when you are performing well as a team. I would like to say that we are on a journey and we have only just started it. We still have a long way to go, no one in the team is under any illusions about that, but at least we now know we are on the right path. We have a lot to do and we will continue to work hard, learn, develop and eventually move forwards. 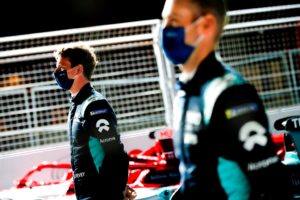 How is the driver pairing of Oliver Turvey and Tom Blomqvist going?

CS: I mentioned before the start of the season how strong I thought our driver pairing is and, having worked as a team in Diriyah, my feelings that we have one of the strongest pairings in Formula E is only strengthened.

Oliver’s pace in qualifying is legendary and it is obvious that he has lost none of his ability to extract the maximum from the car when it really matters. From testing it looked like Tom would be the equal of Oliver, but you never know how it is going to go when the pressure is on and the driver has one go at it. From what we can see from Rounds 1 and 2 Tom is every bit as quick as Oliver in qualifying, so it is going to be an interesting season.

In terms of race pace and craft it can sometimes be the case that if the driver does not fight near the front for a season or two he looses his edge. I have to say that for Oliver his performance in both races under extreme pressure was exemplary – I think I will crack before he does! In Round 1 Tom did not get a fair crack at it due to a technical issue. In Round 2 he was right behind Oliver and racing really strongly when he was collected by an errant machine, so there was not much he could do. I am sure I feel the same way as Tom when I say there is unfinished business there.

There is a one month gap until the NIO 333 FE Team heads to Rome, Italy, for the third round of the Championship on 10th April, what will the team and drivers be doing during this time?

CS: I think everyone has been slightly taken aback by how tiring the first two races were. A double header weekend is always stressful, but obviously in current circumstances there is extra stress to cope with. However, there is little time to lose. The engineers and drivers have been carrying out debriefs from the races and going through the lessons learned and are now working on the development list. We will be busy in the DiL (simulator) and we have test days booked.

Looking at the calendar this is our biggest break, so we really need to extract maximum performance from this period as come April the races are going to be coming at us thick and fast, with little time to react. So basically it’s maximum attack!

DHL renewed the partnership with Formula E and they will continue their commitment to promoting e-mobility, smart cities and low-carbon lifestyles. […]