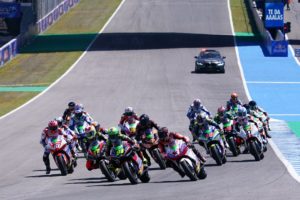 Italian Alessandro Zaccone stepped atop the podium for the first time after showing a great mix of raw speed and focus up to the chequered flag. This is the first win for both the Rimini-born rider and the OCTO Pramac MotoE team, who selected him after his rookie MotoE season last year.

2020 title contender Dominique Aegerter (Dynavolt IntactGP) secured a well deserved second place ahead of the reigning World Cup Champion, Jordi Torres (Pons Racing 40), with the Swiss rider looking at times able to take a shot at the lead in the second half of the race. The Spaniard, on the other hand, proved to be the most consistent rider in the MotoE field, a skill that was key last year in his successful quest for the title. 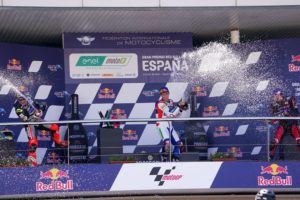 There was plenty of drama to take into account to get the perfect picture of how this race unfolded. Yesterday’s E-Pole top-three all went down at some point in the race: pole sitter Eric Granado (One Energy Racing) crashed out of the lead while trying to pull away from the chasing pack, while Lukas Tulovic (Tech 3 E-Racing) and Fermin Aldeguer (OpenBank Aspar Team) had a coming together triggered by the German rider making an overly ambitious overtaking manoeuvre. Unlike the other two, Granado was able to get back on his bike, crossing the line in 13th.

Xavier Cardelus (Avintia Esponsorama Racing) and Corentin Perolari (Tech 3 E-Racing) were two others who did not make it to the finish line.

Energica and MotoE will return to action in a fortnight’s time at Le Mans, France.

Jordi Torres won in the MotoE race 1 at Le Mans