In the title you can see the short history so far, the FIM Enel MotoE World Cup has taught riders and fans that no championship lead is ever safe. 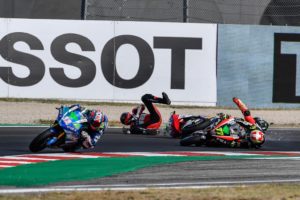 This bitter lesson was learned today at Misano World Circuit by Dominique Aegerter (Dynnavolt IntactGP), who found himself in the gravel trap outside turn two as his podium dreams shattered courtesy of an overly ambitious manoeuvre by Tommaso Marcon (Tech 3 E-Racing). The Italian was trying to recover the third place he had just lost from Mattia Casadei (Ongetta Sic58 Squadracorse) but was way too fast in the quick change of direction between turns one and two and ended up hitting the back of Aegerter’s Ego Corsa machine #77.

This incident allowed Matteo Ferrari (Team Trentino Gresini MotoE) to pull clear from Casadei and Jordi Torres (Pons Racing 40), who ended up slowing each other down in the battle for second place after initially looking capable of bridging the gap to the leader. Despite a brief moment in second place, Torres was unable to maintain runner-up spot from Casadei who looked a lot more comfortable aboard his Energica Ego Corsa machine under braking.

With what was his fourth win from five races at Misano in two years, the reigning world cup champion Matteo Ferrari is the new series leader with 86 points, with Aegerter and Torres four and seven points behind, respectively. Casadei is fourth some 15 points shy of the lead. 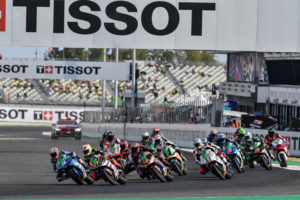 The final event of the 2020 FIM Enel MotoE World Cup will take place on October 11th at Le Mans in France, with two more races to decide the winner of the title in what is shaping to be a thrilling and exciting season finale.

At the end of the Moto E practice day at Jerez to the Andalucia GP, four riders were in just 0.104secs and the fastest has been rookie Swiss Dominique Aegerter. […]