ABT e-Line supports team Infinity Racing from Kempten University, that designs and builds a formula racing car every year.

Around 60 students from nearly all faculties contribute their skills to this registered association to put a road- and competition-ready racing car on the starting grid at Formula Student.

Infinity Racing has been active since 2007 and is now facing its greatest challenge – the move from combustion engine to electric drive.

Their first electric racing car, „Silicia“, is due to make its debut in 2022. ABT e-Line supports Infinity Racing by providing an ABT e-Transporter 6.1 for environmentally friendly transport of replacement parts. It also contributes its e-mobility expertise and helps with training courses. In addition, ABT e-Line provides prototype components and special tools. 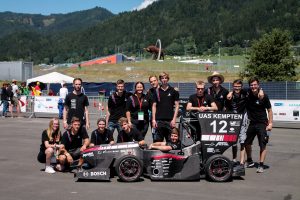 As the „Silicia“ racing car is still under development, the vehicle details have not been finalised. However, the drive concept has been decided. Four wheel hub drives delivering a total of 140 kW (190 HP) provide the vehicle, which weighs around 200 kg, with up to 1600 Nm of torque. An in-house developed battery and inverter complete the 600 V drive train. The full carbon monocoque construction is supported by a double A arm and an aerodynamically optimised chassis design rounds off the race car. Each drive can be controlled individually to transfer its full power onto the tarmac by means of so-called torque vectoring. Its maximum speed is reached at around 124 km/h.

Silicia’s initial test drive is planned for May 2022. Thereafter, it will up the ante at the year’s most important events at famous tracks in Hockenheim, Spielberg, Barcelona and Assen, among others.

Audi is increasingly involved in the “Driverless” and electric Formula Student categories and it’s at Hockenheim with technical jurors and personnel marketing advisors. The mobility of the future is electric and automated. That trend is […]