Claudia Hürtgen has been confirmed by ABT Cupra XE Extreme E team as a female team mate of Mattias Ekström in Extreme E. 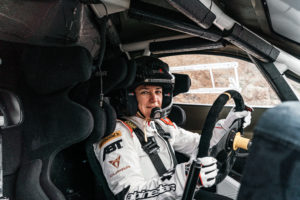 The German has already completed the first days of testing together with her Swedish team mate and familiarised herself with the 400-kW all-electric SUV. This week (17th to 19th December) the squad will participate in joint pre-season tests together with all other teams in Aragon (Spain) before the material and car will be loaded for shipping at the beginning of January.

Even after 25 years in motorsport Extreme E is an all-new and exciting challenge for me that I’m very much looking forward to – says Claudia Hürtgen.

With successes in various touring car and sports car championships, several endurance races and other events under her belt, she numbers among Europe’s most successful female racing drivers.

What makes this competition special among other things is the fact that this is an all-new adventure for all entrants that we’re jointly embarking on.

I learn something new on every kilometre and try to handle each corner with greater perfection. Needless to say, it’s great to have such an experienced and open-minded teammate in Mattias who superbly supports me in this effort.