In spite of the sanitary situation, Microlino go ahead and after the successful IAA exhibition in September, the energies are concentrated in the production  line in Turin.

In fact the current Covid-19 situation and the resulting difficulties in the global supply chain have certainly not made easier to began the production, nevertheless Microlino has some progress in production setup, that start has been postponed to mid of March.

The online configurator is planned to be launched in February and the first test drive events soon thereafter and the delay in the start of production will be made up by a faster ramp-up.

The video just covers the production and assembly of the chassis and Microlino promise to show you the final assembly line once everything will be ready and operating. 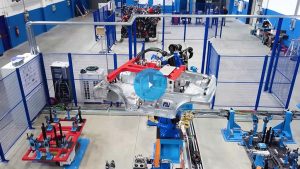 Microlino planned to deliver the first vehicles to customers within the end of the year but the worldwide supply chain chaos affected them, like many other carmakers. Despite the preparations to order crucial parts way in advance, the situation has gotten much worse and is now affecting more and more parts. Now, even commodity parts like simple connectors for the wiring harness have become scarce and have lead times of up to 50 weeks!

They are already producing vehicles with the current production set-up but at a much lower rate due to the missing parts and the shortage of larger quantities. These cars are used for additional testing and process optimization.

The long anticipated online configurator is almost ready and will be launched in February, with the first test drive events following soon afterwards. Apart from the three editions Urban, Dolce and Competizione that Microlino already unveiled, they will introduce the exclusive limited edition for the first 500 Microlinos ever produced, called Pioneer Series.

The configurator will be accessible to all the customers but in the first step only to the Swiss customers, that will be able to make a down payment. Other countries like Germany will follow soon. The exact launch dates per country will be communicated individually.

Below you can see the video…