Nissan supports the policy of Namie, Fukushima Prefecture, to produce energy for local use and become carbon neutral and soon will begin verification tests of the energy management system. 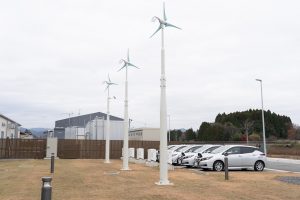 The energy management system utilizes an autonomous control system that generates 100% renewable energy for charging electric vehicles by sending electricity to and from them.

Two problems faced by renewable energy are fluctuations in power generation caused by weather conditions and an imbalance in electricity supply and demand. Combining large-capacity EV batteries with a system that independently charges and discharges them allows renewable energy to be used more effectively and stabilizes the power grid.

Nissan’s autonomous decentralized control system will enable the town’s five EVs to be charged or discharged based on the amount of electricity generated by solar, wind and hydrogen fuel cells, and the electricity demand of the town’s commercial facility.

To determine the optimal timing for recharging and discharging Namie’s EVs, the system considers their battery status and usage patterns.

The system is expected to lower the peak power consumption of the commercial facility and reduce electricity costs.