The first pure electric taxi fleet in Panama and Central America in the City of Colón, in partnership with ENSA Servicios and TRASERVI, has been launched by BYD.

The three companies also inaugurated the first rapid charging station for electric taxis in Colón province, with the aim of building a solid foundation for promoting electric mobility in Panama.

The launch saw seven BYD e6 taxis enter the local transit system, soon to be followed by another 30 units. In the second phase, 60 additional units will enter the system by the end of the year. In the short term, there are plans to add 1,500 units to Colón province’s overall taxi fleet.

The charging station, which is located outside the local offices of ENSA in the city’s Arco Iris district, can help carriers in the region to move towards emissions-free electric mobility. ENSA will also deliver a fleet of six electric buses to Ruta Urbana de Colón, a local operator that plans to completely electrify some 100 buses in the short-term.

The launch of the first pure electric taxi fleet in Panama and Central America was both an exciting and monumental occasion – said Stella Li, Senior Vice President of BYD.

We thank ENSA Servicios and the groups Ruta Urbana de Colón, Radio Taxis del Atlántico and Taxis Auténticos of Colón to have chosen BYD as their partner. We will work together to introduce more electric vehicles in the future and offer passengers a more efficient public transport system with environmentally friendly technologies.

In addition, this April BYD announced the signing of a cooperation agreement to bring its K9 pure electric bus to Panama City, with local operators MiBus and ENSA Servicios, as part of a six-month pilot scheme that will integrate the K9 into the public transport system of the Panamanian capital.

BYD’s zero-emissions transport solutions are proving popular across Latin America, with the company delivering 12 K9 electric buses to the Argentinian city of Mendoza on May 24, creating Argentina’s first ever pure electric bus fleet.

BYD, with regional offices in Panama, has been the global leader in sales of electric vehicles for four consecutive years (2015-2018) and has delivered more than 140,000 electric vehicles, bringing cleaner and greener public transport to people in more than 300 cities in 50 countries and regions across all six continents. 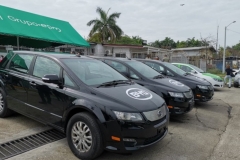 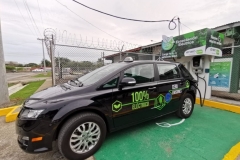 New energy technology company BYD has signed a deal to deliver 100 pure electric K9FE buses to Chile’s capital Santiago. The collaboration with Chilean energy distributor ENEL will see the delivery of the e-buses and […]