AB Dynamics and Volkswagen Group tested a highest number of vehicles that have ever been successfully synchronised in a single swarm. 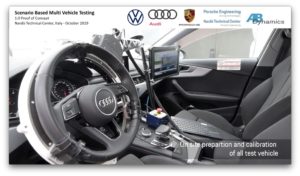 To the test, AB Dynamics has collaborated with VW, Audi and Porsche to demonstrate what AB Dynamics says with the movements of seven automated vehicles were synchronised with an Ego vehicle (the vehicle under test) in a range of tests at the Nardò Technical Centre, Italy.

Captured in a video prepared by VAG, a total of 152 tests were carried out over 11 days, including high speed runs up to 130 km/h and ‘cutting in’ manoeuvres with vehicles as close as one metre. AB Dynamics supplied test equipment and engineers from its UK and German offices, and from its Italian distributor, Leane, who worked in conjunction with personnel from VW, Audi and Porsche.

These tests were much more complex than a Euro NCAP scenario which typically involves one target vehicle plus a guided soft target – explained Leo Evans, Senior Engineer at AB Dynamics. In the real world, interactions often involve multiple vehicles but running several automated vehicles in close proximity has challenged the industry until now, meaning human drivers were often used instead.

AB Dynamics overcame the control challenge by implementing an innovative communications system using dual-band IP radio, providing highly dependable data transfer from vehicle-to-vehicle and vehicle-to-base through secure mesh networks. This avoids the interference and signal loss that can occur with standard WLAN technology when used with multiple vehicles, which can lead to tests being aborted.

The robust communication platform allowed AB Dynamics’ patented Synchro control system to accurately synchronise the movements of the test vehicles. The movements of as many as seven automated vehicles were synchronised successfully and repeatedly with the Ego vehicle on a single trigger broadcast. In addition to the mobile control centre, the vehicles involved included: four under robot control; two under drive-by-wire control; one AB Dynamics global soft target (GST) plus the Ego vehicle. All the equipment used was fully portable, meaning the tests can be carried out at any suitable location.

As the automotive industry increasingly moves from ADAS testing and validation to full vehicle autonomy, the need to control traffic swarms reliably under different test scenarios will become even more important – says Jeremy Ash, Sales Director at AB Dynamics. “The Nardò tests have demonstrated that we have the capability and all the tools in place to do this today.

As well as demonstrating the ability to accurately control and synchronise all the vehicles under test, the other ambition of the project was to use one OpenScenario run file for both simulation and track testing.

This capability allows a test scenario to be quickly and simply ‘copied and pasted’ from simulation to the track – says Jeremy. It allows much of the set-up work to be done virtually, making track testing more efficient, which significantly reduces cost. Perhaps most importantly, through simulation many variations of a particular scenario can be tested virtually with correlation taking place on the track.

AB Dynamics is the only supplier that enables customers to progress from virtual laboratory-based evaluation to real-world track testing in a single digital environment.

Following you can see the video of the swarm tests 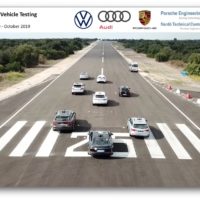 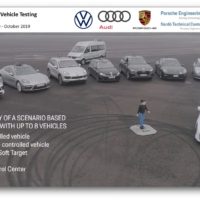 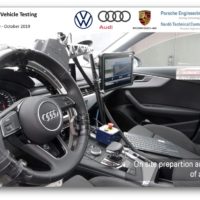 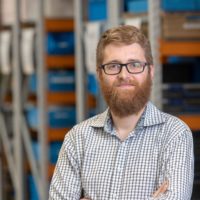 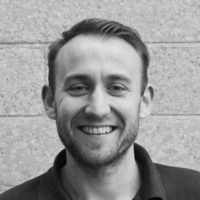