Rimac’s short but rich 10-year history from garage start-up, started by one man – Mate Rimac – now takes its next big leap forward to begin officially operating under Bugatti Rimac as of 1st November 2021.

The Rimac Group will be the major shareholder in Bugatti Rimac with a 55% stake. Mate Rimac will retain his shareholding in Rimac Group at 35%, with Porsche at 22%, Hyundai Motor Group doing the same at 11% and other investors at 32%. The development, production and supply of battery systems, drivetrains and other EV components that Rimac is known for and trusted by many automotive manufacturers will be separated into a new entity – Rimac Technology, which will be 100% owned by the Rimac Group. 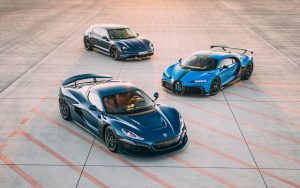 Bugatti Rimac sees the unique combination of two automotive and technological trailblazers. Rimac’s distinctive agility, technical expertise and relentless innovation in the EV sphere, along with Bugatti’s 110-year heritage of design and engineering some of the world’s most iconic hypercars, are now combined in the leading hypercar company. Porsche will play a strong role in the joint company as a strategic partner. Besides two managers, the Stuttgart based sports car manufacturer will appoint two Supervisory Board members, Oliver Blume and Lutz Meschke.

Mate Rimac’s leadership and strategic direction that has seen Rimac become an industry frontrunner means he is exceptionally placed to lead the new company as Chief Executive Officer. As CEO of Rimac Group, he will run both Bugatti Rimac and the new division, Rimac Technology.

Bugatti Rimac’s global headquarters is situated at Rimac’s current base on the outskirts of Zagreb, Croatia, but in time will transition to the recently announced €200M, 200.000m2  Rimac Campus, also serving as the home of Rimac Technology.

With construction having now begun, joint research and development of future Rimac Automobili and Bugatti hypercars will ultimately take place at the Rimac Campus – due to open in 2023. High-tech innovation forms the basis of the state-of-the-art facility, with the capacity to host 2,500 curiosity-driven people and a hive of groundbreaking developments. Bugatti Rimac starts operating with 435 employees as part of the new company, 300 of which will be headquartered in Zagreb, and 135 in Molsheim, France. In addition,180 people at Bugatti Engineering’s location in Wolfsburg will support the new company. Rimac Technology will consist of over 900 employees. The Rimac Group numbers over 1.300 employees across its various locations.

Bugatti Rimac’s new Board of Management sees Christophe Piochon appointed as Chief Operating Officer. He formerly held the position of Director General at Bugatti Automobiles and guarantees the continuation of the manufactory with its worldwide outstanding quality. Larissa Fleischer becomes Chief Financial Officer. She was previously head of controlling at Porsche in the areas of digitalization and the development of new business models. Emilio Scervo is named Chief Technology Officer, having previously held the same position at Rimac Automobili.

Rimac Automobili and Bugatti Automobiles will each continue to operate as separate brands and manufacturers, retaining their individual production facilities in Zagreb and Molsheim respectively as well as the distribution channels. 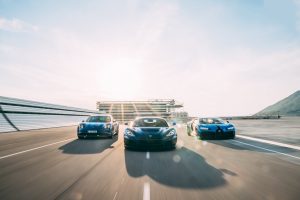 Rimac Technology will continue to innovate, developing vehicle systems and technologies for many global OEMs. Such innovative technology can also be deployed in future Bugatti and Rimac models.

I am honored to be leading this new fusion of automotive minds and begin what will no doubt be a successful, revolutionary and exciting new chapter for everyone involved. I am also extremely curious to oversee the profound impact Bugatti Rimac will have on the industry, and I look forward to developing innovative new hypercars and technologies.

It’s difficult to find a better match than Rimac and Bugatti. What each party brings to the table in terms of technical expertise, know-how and automotive history makes for an electrifying recipe. Rimac’s fast-paced operations and electrification skills are the perfect complement to Bugatti’s exceptional heritage and craftmanship. Stay tuned for some truly extraordinary projects in the future.

I am convinced that we have found the right mix of experience and know-how, innovative strength and team spirit for the management – says Lutz Meschke, Deputy Chairman of the Executive Board and member of the board for Finance and IT at Porsche AG. That’s why I’m very optimistic. And because the project is very close to my heart, I will continue to accompany it closely and passionately in the future.

Oliver Blume, Chairman of the Board of Management at Porsche, names this merger as “the perfect solution” for everyone involved:

Together, we are creating a high-performance automotive company. We have succeeded in positioning the traditional Bugatti brand with its charisma for the future in a way that creates value. Bugatti embodies fascination and passion, and Rimac has great innovative strength and tech expertise.