Czinger is a Californian company based in Los Angeles, that uses revolutionary design and manufacturing technologies to build state-of-the-art, homologated high-performance vehicles.

On July 21 at 7:43pm PT, the Czinger 21C Hypercar, with driver Joel Miller behind the wheel, set the record in a multi-GPS verified time of 1:25:44.  The previous track record was held by the McLaren Senna, with driver Randy Pobst setting a time of 1:27.62.

Under ideal conditions – the weather was clear, with a wind direction of about nine mph NW and an air temperature of 60 degrees – the Czinger vehicle also broke the previous record on two other laps, with times of 1:27:4 and 1:26:6.

As a blue-collar kid growing up in Cleveland, Ohio, I used to lie awake at night thinking about my racing hero, Jim Hall, his latest innovations, the technology-packed Chaparral cars his team built, and racing on the legendary Laguna Seca Raceway – said Kevin Czinger, the Founder and CEO of Czinger Vehicles and of Divergent 3D, the company that is revolutionizing the car manufacturing industry.  “The era and the AI-based and sustainability-focused technologies available are different but the animating spirit remains the same – living the American Dream at speed. 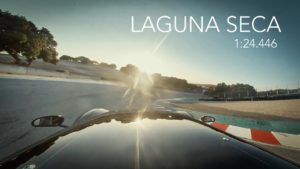 It goes without saying that we are delighted with the performance of the car – said Ewan Baldry, Chief Engineer at Czinger. To be able to achieve this lap time with a car that is going into homologated production is the result of some incredibly hard work from the Czinger team and in particular our ability to exploit the cutting-edge technology that we have access to through our close association with Divergent. The most exciting part is that we know we have more performance to come!

In fact, the lap record represents just the first in a planned string of future performance record attempts, he noted.

Building a new car is not easy and this group built one fast car – said Joel Miller. I can only thank them for having me as the driver during the development process and record run. The revolutionary technology used to build the car complements the speed that it has. And it has a sports car soul when driving. You can feel what the car is doing in the steering wheel. What the powertrain is capable of doing is absolutely mind blowing at maximum power. When setting the record at Laguna Seca, it was not by a little bit but a massive amount!

About the Czinger 21C 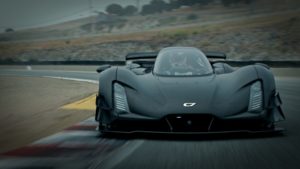 The Czinger 21C, the first model in a series of fully homologated, exclusive performance vehicles – production will be limited to 80 cars – was created in part using additive manufacturing technologies. Each component manufactured using this technology is computationally engineered using AI, optimized for weight and performance, and is beautifully finished by hand.  Czinger’s proprietary manufacturing technologies, in-house developed powertrain, and iconic design will guide its future family of vehicles and enables the design and engineering team to unlock performance and styling not before seen in the automotive industry.

Of special significance, the 21C V8 is designed to use a range of fuels, including carbon recycled methanol and other e-fuels, so it can be run as a zero-emission vehicle.

This new hypercar showcases significant updates since its first public introduction in March 2020, including an updated width of 2050 mm.  With 1250 hp and a dry weight under 1240 kg, the 21C achieves a true 1:1 power-to-weight ratio.  It also features all-wheel drive with a strong hybrid powertrain that includes the world’s most power dense production IC engine as its foundation.  It also features two high output electric motors, each powering a front wheel with torque vectoring, and an ultra-light, sequential seven-speed automated manual transmission gearbox. The total strong hybrid system delivers a peak output of 1250hp (1233bhp).

Following you can see the video.

At Geneva Auto Show the moment of Techrules Ren RS