The Mercedes-Benz Untertürkheim plant is advancing its transformation into a high-tech location for electric mobility after the foundation ceremony to battery factory.

As a part of expansion of the global battery production network at the site of the Mercedes-Benz Untertürkheim plant in Germany, the construction of the battery factory at the Brühl sub-plant starts in the presence of numerous guests of honour from the world of politics and business.

With the factory for traction batteries – the first in the Neckar Valley – the Mercedes-Benz Untertürkheim plant gears itself even more to electric mobility.

The global battery production network within the production network of Mercedes-Benz Cars comprising a total of nine battery factories at seven locations on three continents. By the end of the decade, Mercedes-Benz Cars will produce high-efficiency traction batteries for future Mercedes-Benz electric vehicles of the EQ product and technology brand on 12,000 m2 in a newly erected and carbon-neutral battery factory at the Brühl sub-plant near Stuttgart, the state capital of Baden-Württemberg, Germany.

The foundation laying ceremony was attended by: Dieter Zetsche, Chairman of the Board of Management of Daimler AG and Head of Mercedes-Benz Cars, Winfried Kretschmann, Minister President of the German state of Baden-Württemberg, Wolfgang Reimer, District President of the Stuttgart Administrative District, Dr Jürgen Zieger, 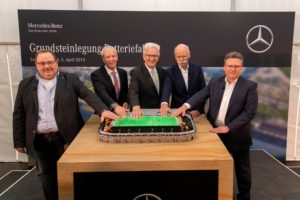 The laying of the foundation for the battery factory at the Mercedes-Benz Untertürkheim plant is a good sign for the sustainability of the mobility and for the economy – and thus also for the people in the region. The battery factory at the Brühl sub-plant stands for our promise to make both our cars as well as their production even greener. In future, we will assemble the heart of the electric car – the battery – here ourselves – says Dieter Zetsche, Chairman of the Board of Management of Daimler AG and Head of Mercedes-Benz Cars.

Development, production and integration of complex battery systems are among the core competencies of Mercedes-Benz Cars.

In recent years we have done a great deal to meet our clear goal of zero emissions in traffic. And in laying the foundation stone for this battery plant, we are taking a further step towards this goal. We want the new mobility to be emission-free, connected and autonomous. And Daimler is a decisive proponent of this. With a major electric initiative, as well as with emission-free products and production methods, Daimler is going full speed ahead for sustainable mobility. The battery plants here and in Sindelfingen will strengthen Baden-Württemberg’s role as a leading provider of sustainable mobility, and help to safeguard value creation and employment over the long term – says Minister President Winfried Kretschmann.

But if we want to progress from automobile region no. 1 to mobility region no. 1 in the world, occasional innovations will not be enough. What we need is a whole firework of innovations. This is why two years ago, I created a new format that brings politics, business, science and society around one table: the strategic dialogue for the automobile industry in Baden-Württemberg. A new type of format for a new order of historic transformation. And Daimler has contributed greatly to this from the very start – said Winfried Kretschmann, Minister President of the German state of Baden-Württemberg. 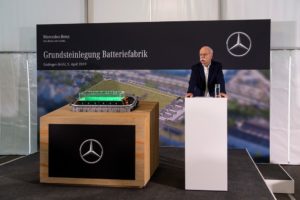 Daimler purchases the battery cells on the world market. The blocks of cells are assembled into an installation-ready overall battery system in the battery factories – including housing, control unit as well as functional testing.

Our powertrain production network is in the midst of the transformation. With the battery production at the Untertürkheim plant, we are further advancing the transition into a high-tech location for components of electric mobility. At the same time, we continue to produce conventional engines, axles, transmissions and components in large numbers. This flexibility of the team makes us strong – said Frank Deiß, Head of Powertrain Production Mercedes-Benz Cars and Site Manager of the Mercedes-Benz Untertürkheim plant. 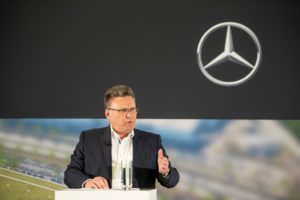 The production of batteries requires maximum precision and expertise. All employees who will work on the assembly line in the Brühl sub-plant will be trained in the area of high-voltage technology. In addition, they earn the necessary qualifications in a pilot factory for batteries at the Untertürkheim location.

With the construction of the new battery factory as part of Daimler’s e-offensive, the next milestone on the migration path from the internal combustion engine to electric mobility will be laid here in Brühl. Being a university city with more than 100 years of tradition in mechanical and electrical engineering, Esslingen supplies precisely those well-trained professionals that drive and implement the current structural change in the automotive industry concerning product planning, supply chains and production processes. The current investment in the new battery factory here in the Neckar-valley is therefore a unique commitment to the city of Esslingen as industrial site of future technologies – said Dr Jürgen Zieger, Lord Mayor of the City of Esslingen.

E-projects at the Untertürkheim location

As part of the negotiations on the target visions of recent years, a “Project Centre eATS” has been in existence at the Mercedes-Benz Untertürkheim plant since autumn 2018 in order to build up know-how for the next generation of an electronic powertrain (eATS). There is also an “E-Technical Centre”, where prototypes for the electric powertrain are built, amongst other things.  In addition, since the beginning of 2019 the Untertürkheim plant has been responsible for the battery pilot factory. It forms the bridge between development and series production. This is where the energy storage units are tested and optimised for a production-oriented product design in order to ensure an efficient large-scale production in the worldwide battery factories. In addition to building the batteries, the pilot factory qualifies employees for the future series production at the Brühl and Hedelfingen sub-plants. The Mercedes-Benz Untertürkheim plant thus bundles important skills as a pilot factory, especially for the battery production. Furthermore, the company announced in 2018 that the capacity would be doubled again beyond the battery production already agreed with the works council the previous year. In addition, it was agreed that a battery factory will also be added at the Hedelfingen sub-plant of the Mercedes-Benz Untertürkheim plant.

Many colleagues working in gasoline and diesel engine production have to be qualified for the new alternative powertrains and especially for working on the high-voltage systems. We have signed a job security agreement with the company through to the end of 2029. That is why investments in issues with long-term prospects are necessary at the location. This includes today’s ground-breaking for the battery factory.

As part of the planned “Project Future” reorganisation, company management and the works council have agreed to extend safeguarding the future through to the end of 2029. Business-related lay-offs are precluded until then. The provision goes into effect with the start of the new structure likely from autumn 2019. 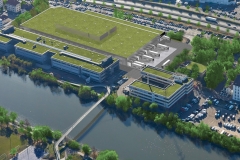 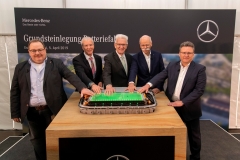 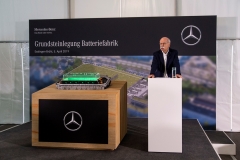 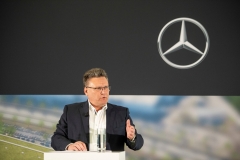 Van Mercedes-Benz EQV 300 has been endurance tested on ice and snow in Arjeplog, Sweden, at temperatures reaching minus 30 degrees. […]

The first urban flight of Volocopter in Europe in Stuttgart

During the presentation of technical innovations and sustainable transport concepts for future mobility at the Mercedes-Benz Museum in Stuttgart, Volocopter flight for the first time in Europe. The Minister-President of the state of Baden-Württemberg, Winfried […]