First two Pininfarina Battista pure-electric hyper GT cars has been delivered in North America, including the first of the exclusive Battista Anniversario cars.

The delivering to new owners in October, marking another significant milestone for Italian luxury car brand Automobili Pininfarina. The first bespoke Battista is followed by the exclusive Battista Anniversario, which will also leave the Battista Atelier in Cambiano, Italy this month to be received by another U.S. owner.

The arrival of the first two Battista cars in the U.S. coincide with a strengthened presence in the region for Automobili Pininfarina, through the addition of a new retail partner in Dallas, Texas.

Additionally, this month, the first ever series production Battista will make an exclusive appearance at a customer event in New York state. It will be presented to clients with the newly created four-piece Battista Luggage Collection, which is making its global premiere at the event. The unique set is finished in tan leather with matching stitching and Triangolo quilting, echoing the interior design of the Villa d’Este 2021 award-winning Verde Paradiso Battista. 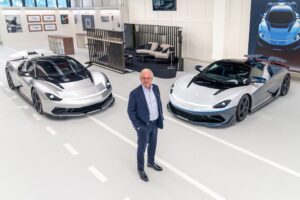 Every Battista is bespoke, with the first U.S.-bound example individually tailored and designed by its owner, a private collector on the West Coast, in collaboration with Dave Amantea, Automobili Pininfarina Chief Design Officer. Since its North American debut as a design concept during Monterey Car Week in 2018, Battista has proved a popular choice with collectors in the region. This is largely due to widespread appreciation of the Pininfarina badge as assurance of not only legendary design, but also investment potential, proven by the consistent high values of Pininfarina-designed classic cars in the resale marke.

The streamlined Goccia roof is painted in Nero and the Exterior Jewellery Pack has been specified by the client in brushed aluminium painted in a bespoke vibrant red. This sees a line extending along the lower body parts accentuating the dramatic shape and flowing lines of the Battista’s body. Matching red brake calipers and centre lock rings complement the Impulso wheel rims painted in Gloss Black.

The interior upholstery is finished in chrome-free leather that is sustainably tanned by a supplier local to Automobili Pininfarina in Italy, using the leaves from regional olive tree harvesting. The GT seats are finished in a red luxury leather with black contrast stitch and quilting combined with a black Triangolo quilting on centre console and door inserts continuing the colour theme and detailing inside the cabin. Every detail is considered on this example, with a bespoke car key – a special request from the customer – featuring a stripe finished in the same red anodized brushed aluminium to match the interior Aluminium Detailing.

The second Battista to leave the Atelier this month is the first of five exclusive Battista Anniversario cars, all of which were sold to U.S. clients during its world premiere at Monterey Car Week in 2021.

Made in Italy: the new Battista atelier

Every Battista is meticulously hand-crafted in the recently opened Atelier, where prospective owners are invited to a dedicated commissioning lounge to collaboratively design their hyper GT as part of the bespoke programme. With a near-infinite combination of bespoke enhancements possible, this unique customer journey makes owning Battista a special proposition unlike any other.

The first U.S. bespoke Battista was assembled by 10 craftspeople and took more than 1,250 hours as it moved through 14 production, paint, and quality assurance zones before leaving the Atelier for delivery. The Battista Anniversario, the second U.S. model to leave the Atelier, required an extended 18-week schedule and 1,340 hours to complete due to its hand-painted finish and bespoke design features.

The Italian luxury carmaker has enhanced its U.S. presence with the addition of Automobili Pininfarina Dallas to its growing retail network, the 10th world-class retail partner for the marque in North America.

Automobili Pininfarina Dallas, run by the established Avondale Group with more than 30 years of luxury automotive sales in Texas, will provide a personalised client experience to prospective and current 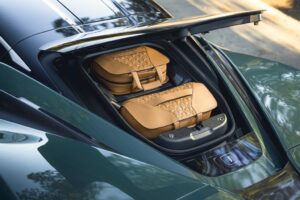 A newly created tailored Battista Luggage Collection is now available and is as bespoke as every Battista. Automobili Pininfarina has launched the luxurious four-piece luggage set exclusively for Battista, including a cabin travel bag, weekend holdall, shoe bag and suit bag.

Elegantly designed to fit perfectly inside the hyper GT, the set is available alongside the bespoke personalisation service options for each hand-finished example, ensuring the luggage precisely matches the individual specification of a client’s Battista, allowing them to express their personality everywhere they travel.

Award winning design and engineering on the wrist: the Battista tourbillon

In 2021 Automobili Pininfarina Battista and BOVET 1822 designed and presented the incredible Battista Tourbillon timepiece for the first time to an exclusive group of clients during Monterey Car Week. With expert designers and engineers working seamlessly alongside one another in the creation of this remarkable timepiece, the Tourbillon carries a design vision based on legendary styling and innovation. An emblem of modern, sustainable luxury, the Battista Tourbillon has now been named by Elite Traveler as one of the Top Watches in the world for innovation.