Its software quickly generates customisable, optimised designs that can increase the utilisation of pack volume by up to 120%. 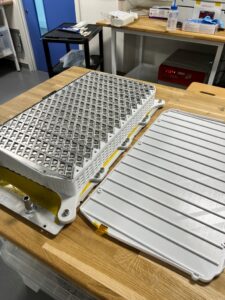 Ionetic can reduce battery pack design costs by over 90% for automotive OEMs and the plans to open a UK-based factory next year, will allow Ionetic to be the only UK-based battery pack developer to offer an end-to-end, in-house battery solution, from initial conceptualisation to mass production.

Ionetic can also produce a battery pack design in days and reduce the costs of getting from requirements to mass manufacture by over 90% for automotive OEMs. This is due to the platform’s ability to automatically generate designs according to a series of fully adjustable parameters, while offering a vertically integrated solution to battery pack production, which includes homologation and mass manufacture. 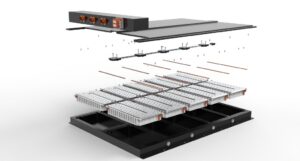 Ionetic’s modules are customised automatically by the design platform. This means they can be optimised for the volume available to the customer for their battery pack.

Off the shelf modules are a fixed length so the vehicle must be designed around them. To give an example, a 110cm space can fit two VDA390 modules, but leaves a 32cm space; not enough to fit a third but still a large empty space.

In a design exercise with an electric conversion company, they achieved an energy of 88kWh in the same space previously occupied by a 40kWh off the shelf system, an increase of 120% energy.

This process can ordinarily cost between £40-80m.

Due to Ionetic’s technology, capabilities, and production strategy, this cost can be reduced to £4-10m, for a 70kWh battery pack. £40 million reduced by 90% is £4 million.