12th October 2017. Not only was BYD named for the second time in three years as Low Carbon Heavy Duty Vehicle Manufacturer of the Year (sponsored by Freight in the City), but BYD, Transport for London (TfL), and Go-Ahead London jointly won the ‘Grand Prix’ -or winner-of-winners -award for their effective partnership in delivering the vehicles, operational capacity and infrastructure to begin running London’s first two all-electric bus routes (507 and 521). Waterloo bus garage has been remodelled to accommodate over 50 electric buses, Europe’s biggest fleet, and new charging infrastructure in a space-constrained environment. Working with infrastructure supplier, SSE, the partnership has overcome technical challenges to transform the garage into a large-scale, fully-electric operation.

“When we won this prestigious Award in 2014 we were recognised as being pioneers in the electric bus revolution. This year our technology, proven on the streets of London and other major cities, is being rewarded for its outstanding performance, durability and efficiency”.

“The whole team at BYD and our partners Alexander Dennis Ltd (ADL) is honoured and delighted by these Awards which reflect the tremendous commitment we have made to not only being first to market with our electric buses but also to delivering a wholly reliable product which has delivered exactly what our customers wanted –a viable and effective alternative to the diesel or hybrid bus without any operational compromises”.

Commenting on the Grand Prix award, the judges said:

“To accommodate over 50 electric buses and charging infrastructure in a space-constrained environment, the group worked tirelessly to remodel the Waterloo bus garage. The manufacturer, BYD, and the operator, Go-Ahead London, worked with Transport for London and in close cooperation with infrastructure supplier SSE, to bring this challenging project to fruition.”

Commenting on the BYD entry for the Low Carbon Heavy Duty Vehicle Manufacturer of the Year Award, the judges said:

“BYD’s entry for the introduction of battery electric bus fleets in different cities around the UK represents a step-change in low carbon vehicle uptake in the heavy-duty category. Providing vehicles and charging solutions for the conversion of a whole bus depot from diesel to electric power deserves particular praise and illustrates how their products have developed beyond trials to full scale market deployment.” 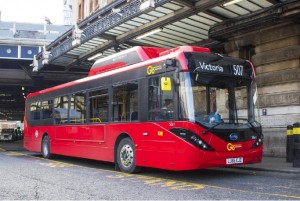 Over 240 guests attended the celebration dinner to celebrate the achievements and innovation of organisations and individuals who areleading the UK towards low emission road transport. The event was hosted by TV personality, science communicator and Formula E presenter, Nicki Shields.

The LowCVP Managing Director Andy Eastlake said about the Awards:

“All the entries that were short-listed for this year’s Awards deserve praise for their contribution to cutting road transport carbon emissions and helping to reduce air pollution.”

The Champions Awards judging panel was comprised of 25 senior executives from across a range of UK organisations with a stake in the low carbon road transport agenda.

BYD continues to develop the Canadian zero emission bus market and now signed a deal to deliver ten 40 foot electric buses. The order include an option for an additional 30 buses to the Toronto […]

Electric vehicles and football: partnership between BYD and Arsenal FC

Arsenal Football Club is the official BYD Global Car and Bus partner following an agreement signed in London this week. The Partnership will focus on BYD’s strength as a leader in electric vehicles. The agreement […]