American Company from California Fisker Inc. announced that will be in Munich, Germany, the location of its European headquarters named “Matrix”.

The choice of Munich  has been made considering that offers convenient access to key European EV markets and also for close proximity to Magna’s Graz facility in Austria.

Earlier this month, Fisker revealed details surrounding its new global HQ, named ‘Inception,’ which is to be located within Continental Park at 1888 Rosecrans Avenue in the city of Manhattan Beach, California.

Fisker recently announced a strategic cooperation with Magna International supporting the co-development and manufacture of the Fisker Ocean SUV, projected to launch in Q4 2022. The Ocean will be assembled by Magna in Europe and is poised to deliver class-leading range, functional interior space with third-row seating and overall class-leading vehicle performance. 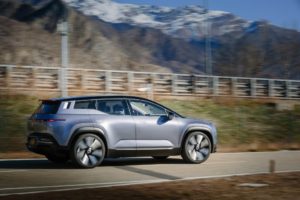 The substantial vehicle order agreed with Viggo in Denmark demonstrates our growth potential in Europe. Munich has long been a major global hub for the automotive industry. Locating our regional headquarters in Southern Germany will enable us to make a fast and efficient start to building our sales and distribution operations across Europe. Easy access to both the Autobahn network and alpine roads was also a consideration for validating our vehicle performance targets.

Earlier this month, Fisker confirmed the signing of a significant vehicle order for 300 units with Viggo, the technology-driven Danish ride-hailing service. Viggo, founded in 2019, is aiming to challenge the standards for urban transportation through advanced data-driven innovation delivered through a fleet of 100% electric vehicles.

The company is also announcing progress on the overall Fisker Ocean SUV program. Co-located engineering teams across the world are effectively utilizing 22 out of every 24 hours to deliver the Ocean program through its first gateway, targeted for November 2022.

Work on the advanced drivetrain is underway through a dedicated powertrain engineering team – and Fisker software designers and engineers are now running simulations for Human Machine Interface (HMI), as well as related User Interface (UI) and User Experience (UX) systems, all of which will ultimately power the unique Fisker in-vehicle and ownership experiences.

A shared vision for success has been quickly established between the Fisker and Magna engineering teams, which is key for enabling us to jointly deliver the Ocean, as planned, in Q4 2022. Given the uptake in European reservations, we are also accelerating the roll out of our consumer experience centers, with the first one anticipated to open in Europe in Q4 2021, also in Munich – added Fisker.