Lightyear signed the unprecedented design performance of the spacious 5-seater EV Lightyear One with an impressive low energy consumption.

Dutch technology company setting a new world record for the most aerodynamic car.

According to Lightyear, this achievement is only possible by starting the design of the car from scratch with a completely new architecture. The company is committed to its vision of making EV mobility scalable through the grid-independent solar car, and therefore, to keep on delivering optimal performance that matters most for EV drivers.

In only 2,5 year, the innovative Dutch tech company built its first prototype: Lightyear One, based on its legacy as four-time ‘World Solar Challenge’ Champions. With only months since the prototype’s unveiling, the company has been fully dedicated to the validation of the optimal design performance of Lightyear One; and keeping its energy consumption at lowest is of paramount importance. Lightyear owes its world championship title to the ability of predicting the car’s energy consumption extremely accurate.

Recently, Lightyear’s engineering team has performed the first series of validation for the aerodynamic performance of Lightyear One. During a week of testing in a windtunnel facility in Turin, the Lightyear team was able to validate their simulation models and confirm a drag coefficient (Cd) below 0.20. This means a newly established record in aerodynamics for Lightyear One. The exact number will be made public when the car is fully developed. With the results as they stand, Lightyear One will likely be the most aerodynamic car available in the market. 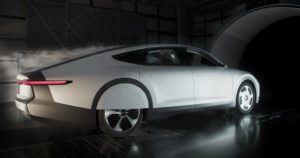 With these tests, Lightyear is thrilled to see their calculations validated and excited to reach unprecedented design performance. Optimal aerodynamics are a key factor to achieve an outstanding low energy-consumption for a vehicle that combines the passenger capacity of a 5-seater and the trunk capacity of an SUV. To achieve the most optimal aerodynamics within these requirements Lightyear started designing from scratch with an innovative mindset, not attached to existing conventions.

This significant improvement is only possible because we re-designed the car as we know it, radically starting from scratch and focussing on EV performance metrics that matter most for EV drivers: ample range and fast-charging speeds.

Lightyear: the future of EV is grid-independent

Lightyear’s vision is radical too; the company is committed to making electric driving accessible on a large scale; with a grid-independent car, a solar car. For Lightyear, grid-independent means convention-independent. Through its commitment, Lightyear clearly chooses for a strategy that differentiates itself from the current EV manufacturers, that focus on conventional metrics such as acceleration and achieve it through larger battery packs.

Here the video about Lightyear One in the windtunnel.