British Company EAV has been surprised by the interest and demand for the new ultra-lightweight commercial vehicles eCargo recently launched.

On the verge of the UK leaving the European Union, the interest from European companies has been extremely positive for the recently launched EAVcab. 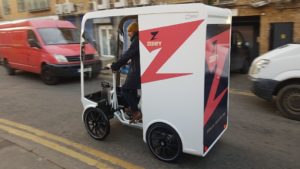 The EAVcab is a chassis cab development from the EAVan Ultra lightweight Commercial Vehicle (ULCV) which can now be supplied to the customer with the chassis structure and front cab combined and a rear box or deck of multiple choices. The purpose-built, environmentally-focused quadracycle weighs in at 120kg and can currently carry a 120kg payload. The 250 watt motor helps the rider accelerate to an initial 6km/h (3.7 mph) on a boost/hill start assist button and then on to a maximum pedal-assisted 25 km/h (15 mph). The EAVcab can cover a range of up to 60 miles in a day and then be recharged using a normal 13amp, 240V plug socket. Batteries can also be swapped to keep the EAVcab in constant operational use but are fully charged in under 6 hours. Additional batteries can be fitted to increase range.

The EAVan, predecessor to the EAVcab, has recently been on trial with multiple delivery companies including the city green logistics company, Zedify.

The EAV is clearly a very capable and eye-catching new entrant to the market and we’ve been excited about trialling this at our London depot for ages – said Rob King, CEO of Zedify. It’s a beautifully simple design with impressive handling and our riders have enjoyed putting it through its paces. We’re currently looking at how these vehicles could fit within our fleet for our consolidated first and last mile deliveries.

The Oxfordshire based micro-mobility manufacturer Electric Assisted Vehicles (EAV), recently put to the test by Asda its 2Cubed commercial vehicle. […]

At the Oxford EV Summit which took place at the Saïd Business School of the University of Oxford, Electric Assisted Vehicles Limited (EAV) launched EAVan. The EAVan is designed to provide an immediate solution to […]