BYD Europe celebrates the 20th anniversary in Europe in a ceremony that was held in Schiedam, the Netherlands.

The city is a part of the greater Rotterdam region, in South-Holland where BYD’s European Headquarters has been based since December 1998.

Speeches were delivered by Isbrand Ho, Managing Director at BYD Europe, Mr. Guosheng Zhang, Economic and Commercial Counsellor of the Chinese Embassy in the Netherlands, and Mr. Cor Lamers, Mayor of Schiedam.

The latter spoke also on behalf of the City of Rotterdam. Ms. Barbara Kathmann, Vice Mayor of Economic Affairs for the Municipality of Rotterdam joined the reception, together with clients, suppliers, and other business relations of the company.

It is all part of the bright future for BYD’s “new energy solutions” across Europe, driven by the battery technology and the need to clean up the air we breathe – something in which you, BYD and our customers have a crucial role to play. In the Netherlands we were the first to introduce our proven full-size emissions free buses five years ago. We will continue to be an industry innovator, working in close co-operation with academia, our customers and the relevant government and non-government bodies. We have the ability remain a leader even in the face of intensifying competition.

We are committed to the Rotterdam region, to the Netherlands and to Europe. BYD Europe is not only celebrating 20 years, but more importantly in this city. We feel welcome here, with the continuous support of the government, and the support of you: our partners, clients and suppliers.

Guosheng Zhang, Economic and Commercial Counsellor of the Embassy of the People’s Republic of China in the Kingdom of the Netherlands, said:

During these 20 years in the Netherlands, BYD has made some outstanding achievements. Starting off as a battery supplier with only a few employees, you have now expanded into a fast growing business with more than 60 employees, representing solar, energy storage and electric vehicles, and were awarded the “Invest in Holland” certificate by Dutch government. We are proud to witness that you have grown into an important contributor to the Dutch economy and a valuable member of Dutch society. BYD is a high-tech company devoted to technological innovations for a better life. Indeed, the innovative high-tech companies like BYD not only represent cooperation opportunities for our two countries, but also the driving force for China’s economy.

Our region and the city offer good facilities and opportunities for companies to establish. In this business park, on the border of Rotterdam, BYD can continue to develop. I would like to emphasize ‘continue’, because the company’s track record is already impressive. Not surprisingly, BYD is one of the top 5 Chinese investors in the Netherlands. The establishment of the company here supports the positioning of the Rotterdam region as an attractive area for innovative sustainability companies. This fits the Schiedam profile well.

In December 1998 BYD Europe was the first overseas subsidiary of the Chinese-based BYD Company and started importing BYD batteries. A few years later it expanded business with solar panels and from 2012 it added electric buses, forklifts and taxis to its key businesses. Today it also has a growing energy storage business and very soon electric trucks will be included in its portfolio.

Following the success in the pure electric bus business, BYD is the number one supplier of electric buses in Europe with over 650 ebuses sold. It decided two years ago to move its bus production for Europe from China to two plants in Europe: Hungary and France. The Komarom, Hungary-based factory has since then delivered ebuses to Dutch clients Connexxion and Syntus, and to the Swedish operator Nobina. It is also producing the 12m specialized airport ebuses for Brussels Airport Company and chassis for customers in the UK. The plant in Beauvais, France, serves mainly as an assembly plant for the French market and has since its opening in November last year delivered ebuses to three cities in France.

The co-operation between BYD and Alexander Dennis, Britain’s largest coach and bus builder, has led to 60% market share in the UK market. It has also won Transport for London’s and the UK’s first ever electric double deck bus order. 37 BYD ADL buses will be delivered later this year.

The forklift division has been expanding in Europe and this year will be adding France, the Nordics and Poland to its network, already covering nearly the whole of Europe. It currently has over 50 dealers and registered a 40% increase in forklift orders last year. This week it also reached the milestone of its 1,500th forklift delivery to a customer in Europe, with the aim to double this figure in 2019.

Last year BYD Europe established a new market: a market for electric on-highway trucks and commercial vehicles. Two prototype electric trucks, a yard tractor designed for airport, port and distribution centres and a 7.5 tonne electric truck were already brought to Europe in 2018 and have been successfully tested. A sales team is being set up and a dealer network is being built. The launch is planned later this year. 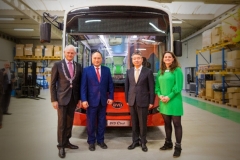 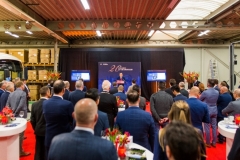 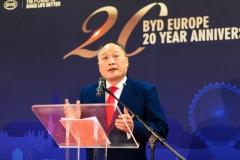