Investor interest for electric cars automakers continues and potential investors are turning attention to Nio stocks led by Singapore, Canada, and the US.

Data presented by Buy Shares indicates the global interest in the keyword ‘Buy Nio Stock’ on Google search has surged by 284% between December 20, 2021, and January 21 this year. The search attained a peak popularity score of 100 during the week ending January 10 on the Google search platform.

Based on regions, Canada leads in interest with a peak score of 100 over the last 12 months, followed by Singapore at 90. The United States ranks third with a popularity score of 74. Belgium ranks in the tenth spot with a score of 25.  The Google Trends platform numbers represent search interest relative to the highest point on the chart for the given region and time.  A score of 100 is the peak popularity for the term while 0 means there was not enough data for the phrase. 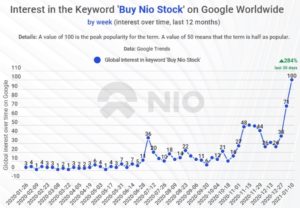 The surge in interest for buying Nio stocks coincides with a period, when Tesla, another electric vehicle manufacturer, recorded a tremendous growth in shares across 2020. Over the past year, Tesla’s stock has grown by over 600%. Following the success, investors are turning attention to emerging electric vehicle stocks, hoping they could provide similar returns. In this case, Nio is well-positioned to offer possible high returns.

The company had a troubled 2020, where it faced a severe cash crunch that made investors doubt prospects. However, since April, state-backed investors have offered liquidity, bailing out the company from near collapse. The state support will potentially play a key role in Nio’s growth. China offers a big growth opportunity for the electric vehicle market with the government incentivizing electric-car developers.

From September 2020, the Nio stock began rising and potential became a momentum investing opportunity. In the long term, prospective investors are essentially willing to buy at the current high and sell even higher. Normally, with momentum investing, once the stock establishes a course, it is more than likely to continue moving high.

The interest in the Nio stocks might also be in line with the company’s range of products that aim to revolutionize the electric vehicle industry. Nio is expecting to have an edge over competitors by innovating in two key areas under the battery technology and self-driving software. This is the narrative likely to drive the company’s stock. The Chinese firm is betting big on modular batteries for its EVs that can be swapped out in minutes. Furthermore, Nio recently announced its new ET7 model. The vehicle is poised to compete on the same level with established manufacturers like BMW or Audi than with Tesla. 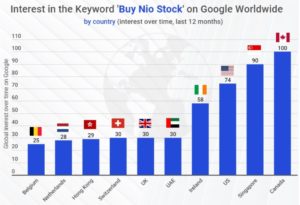 Experts project that Nio stock is poisoned to grow while capturing the large and growing Chinese electric vehicle market. Additionally, the company continues to innovate in battery technology and autonomous driving, key drivers for growth in the sector.

In summary, Nio is turning out to be a great growth stock due to the swift shift in consumer and investor perception about electric cars in 2020. However, this does not guarantee growth for the company’s stock considering it operates in a market that is getting crowded as the conventional auto giants make their entry. Worth mentioning is that Tesla is already established in the Chinese market.