The Jaguar I-Pace eTrophy also has ended with the completion of seven races in nine days at Berlin’s historic Tempelhof Airport.

ABB is Official Charging Partner of the series and lessons learned from the successful partnership will be applied directly to development of the fast chargers that ABB will supply to the ABB FIA Formula E World Championship from Season 9 (2022/23).

Together with engineers from motorsport governing body the FIA, and Formula E, ABB’s Electrification teams are currently working on the specifications for the Gen3 chargers, to develop an innovative and safe portable unit that will charge two ABB Formula E cars simultaneously.

These chargers will house the newest power electronics in the smallest possible footprint, to deliver reliable and consistent performance, wherever in the world they are used and from whatever power source. 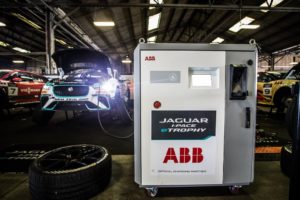 ABB has been the Official Charging Partner for the I-Pace eTrophy series from the outset, having been engaged to develop custom fast-chargers for each of the teams in the series, which races alongside ABB Formula E.

The bespoke Terra 53 chargers were based on those already supplied to ABB customers worldwide.

However, the standard units were designed to be stationary and not to be moved. ABB engineers solved this problem by repackaging Terra 53 internals into a durable 1.5-meter-tall body, with no loss of performance.

These custom units enabled the Jaguar I-Pace eTrophy race cars to recharge within 15-30 minutes and were designed for outside temperatures from -35 to 55°C, so they functioned faultlessly in varied climates throughout the racing season.

ABB has played a vital role in the success of the Jaguar I-Pace eTrophy – the world’s first electric touring car series. Its purpose-built chargers and engineers have performed perfectly over the two seasons. Not only have they powered all of our racecars they have also provided rapid charging for our Jaguar I-Pace production cars at the racetrack. Everyone involved in the eTrophy series is incredibly proud of what we have achieved together. We were a world’s first and those who follow will always be second.

Being the charging partner for the Jaguar I-Pace eTrophy series has been a great way to put our technology to the test in a very demanding setting. Although the support series has now come to an end, we will take our experience using and testing charging technology from this partnership and worldwide to design the state-of-the-art charging solution which we will supply for the Gen3 cars from Season 9 of the ABB FIA Formula E World Championship.