Turin, Italy. 18th September 2017. A ceremony in the historic centreof Turin today inaugurated the arrival of the first zero emission pure electric BYD ebuses which are to go into service in Italy.

Three ebuses arrived in the Piazza Castello to be met by an audience of civic leaders and officials including the President of the Piedmont Region Sergio Chiamparino, the Mayor of Turin Chiara Appendino and The Piedmont operator GTT’s President and CEO Walter Ceresa.

The three BYD ebuses are the first of a fleet of 23 which are being delivered after BYD won Italy’s first big tender for 12 metres pure electric buses which was awarded in September last year. Twenty of the buses will serve routes in Turin with a further three going to nearby Novara. 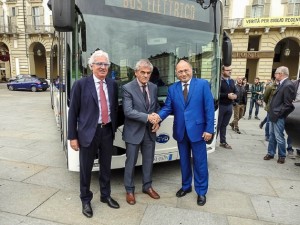 When it was announced, the order confirmed BYD’s position as the world leader in pure electric bus design and development – it had a confirmed bus orderbook of more than 20,000 by the end of 2016. The vehicles are built to the highest quality, in line with the rigorous standards of EU legislation and in compliance with the demands made by the demanding Italian market.

“We are proud to manage, in Turin, the first 12 metre electric bus fleet in an Italian city”, said President and CEOof GTT, Mr Walter Ceresa. “This is an important environmental contribution, that confirms GTT as a cutting-edge company in innovative solutions for Public Transportation”.

“Italy, together with the UK, France and countries in Benelux and Scandinavia, isnow truly a top market for BYD in Europe thanks to the vision of GTT to make Turin green”, said Isbrand Ho, Managing Director of BYD Europe in Turin today. “We are delighted to win this order in the face of strong international competition”.

The tender announced by GTT (Gruppo Torinese Trasporti) in the Autumn of 2015 was the first and most important modular tender for the purchase of large electric buses in Italy. GTT, owned by the City of Turin, serves a metropolitan area with 2 million citizens and operates a fleet of more than 1,100 buses. The BYD ebuses are the first new buses to be ordered for almost 5 years.

Across Europe bus operators are showing an increasing interest in pure electric technology: a technology that is the natural, inevitable evolution of urban public transportation in the medium term. It is where BYD is the absolute global market leader.